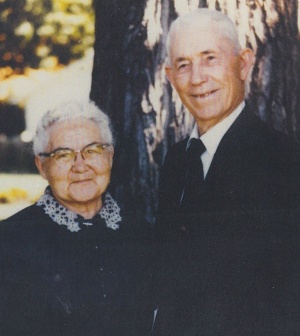 Jakob Andreas Janzen: minister and elder; born on 27 July 1901 in New York, Ignatyevo Mennonite Settlement, South Russia, to Andreas and Maria (Unger) Janzen. He was the eldest of two sons, two sisters having died in infancy. On 21 October 1924, Jakob married Helena Redekopp in New York. They had one son, William. Jakob died on 17 June 1982 in Kelowna, British Columbia, Canada.

Jakob received his high school education in New York, where he was baptized in 1923 by Elder Abram Unrau in the Mennonite Church. In 1929 he and his wife Helena emigrated from Russia with the last group of Mennonites permitted to leave. Sponsored by Helena’s uncle, David Redekopp, in Cuauhtémoc, Mexico, they immigrated to Mexico that same year.

Janzen was called as minister of the Hoffnungsau Mennonite Fellowship in Cuauhtémoc, which applied for membership in the General Conference Mennonite Church. H. P. Krehbiel, representing the Mennonite Board of Colonization in assisting in the settlement of Russian Mennonites in Mexico, led Jantzen in a three-month intensive course in preparation for church ministry prior to his ordination as a pastor in 1937. The following year he was ordained as elder by J. M. Regier.

In 1946 the Janzens immigrated to Canada, settling briefly in Coaldale, Alberta. Upon receiving the call to serve as elder in the First Mennonite Church in Kelowna, which was in the process of organizing, the Janzens moved to Kelowna, where they remained until their deaths. Besides serving the church in Kelowna, he also served as elder of the Oliver Mennonite Church, presiding over baptisms, communion and marriages and preaching at special services.

What Jakob Janzen lacked in formal education he made up by dedicating his entire life to self-education. Officially supporting himself and his family through farming, he devoted his time to studying the Bible, the seven commentaries of Dechsels’ Werke, and Wedel’s Altertumskunde, an important German-language encyclopedia treating the history of the Germanic peoples.