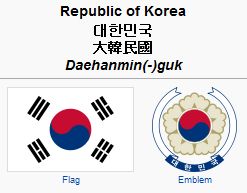 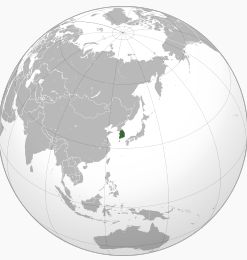 South Korea, officially the Republic of Korea, is a country in East Asia, located on the southern portion of the Korean Peninsula. It is bordered by the People's Republic of China to the west, Japan to the east, and North Korea to the north. Its capital is Seoul. South Korea lies in a temperate climate region with a predominantly mountainous terrain. Its territory covers a total area of 99,392 square kilometers and had an estimated population of 48,875,000 in 2010.

According to statistics compiled in 2005, 46.5% of the South Korean population express no religious preference, 29.2% are Christian (of which 18.3% (on total) profess to be Protestants and 10.9% to be Catholics), 22.8% are Buddhist, and the rest adheres to various new religious movements including Jeungism, Daesunism, Cheondoism, Taoism, Confucianism and Won Buddhism.

Following the unification of the Three Kingdoms of Korea under Silla 668 AD, Korea went through the Goryeo Dynasty and Joseon Dynasty as one nation until the end of the Korean Empire in 1910, when Korea was annexed by Japan. After liberation and occupation by Soviet and United States forces at the end of World War II, the nation was divided into North and South Korea. The latter was established in 1948 as a democracy.

After the invasion of South Korea by forces from the North on 25 June 1950, the resulting war between the two Koreas ended in an uneasy cease-fire, and the border between the two nations is currently the most heavily fortified in the world. After the war, the South Korean economy grew significantly and the country was transformed into a major economy, a full democracy, and a regional power in East Asia.

Mennonite Central Committee (MCC) became involved in South Korea in 1950 with war relief programs. This included a variety of material aid programs, widows' self-help, medical assistance, in-service training for orphanage staffs, the first family-child assistance program in Korea, and a vocational school for orphan boys. While there were no Mennonite-sponsored programs in Korea in 1986, the Commission on Overseas Mission (General Conference Mennonite) and MCC representatives regularly visited South Korea on mission and peace concerns. The Commission on Overseas Mission had placed one short-term teacher in the country, and Koreans have been host to several Mennonite work camps for Asian youth.