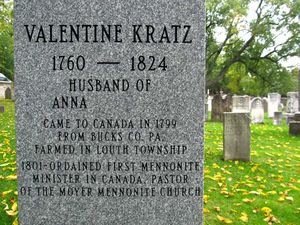 Valentine Kratz: minister and farmer: born about 1760 in Bucks County, Pennsylvania, the son of John and Anna (Clemens) Kratz. He married a woman with the surname Lederach at an unknown date. They had eight daughters and two sons. The four youngest children were born in Canada. Valentine Kratz died about 1824.

Valentine Kratz immigrated to Canada in 1799 from Bucks County, Pennsylvania, as did many others, in search of greater financial opportunity and possibly because of greater comfort with British government. He settled in the Jordan Station area of the Niagara Peninsula. By vocation he was a farmer. The family's first home was a log house with one room upstairs and one downstairs, with the only access to the upstairs by a ladder.  He was remembered as a strict disciplinarian by  his children.

In the first years in Canada, Mennonites did not hold worship services, but would hold occasional informal meetings. Finally the group asked the Mennonites in Pennsylvania to send leaders  who could ordain ministers and deacons from the small group in Canada. In September 1801 six ministers replied that after discussion at the local conference of Skippack (Franconia) ministers and deacons, as well as on the basis of correspondence with leaders in Conestoga (Lancaster), that none of the local bishops felt "armed with courage and strength" to venture to Canada for such a process. They encouraged the small group to proceed prayerfully with nominations, followed by the casting of lots, to select ministers and deacons. Valentine Kratz was ordained as a minister based on this procedure. He was the first Mennonite minister ordained in Canada and this ordination allowed the formation of the first Mennonite congregation in Canada at Vineland -- the Moyer congregation, later known as The First Mennonite Church.

Little is known of Valentine Kratz's ministry. Jacob Moyer, who was ordained the following year and subsequently became the local bishop, had a higher profile and a reputation as a strong leader. Nonetheless, Valentine Kratz willingly undertook a leadership role in shaping the earliest Mennonite community in Canada.