From GAMEO
Revision as of 11:28, 30 September 2017 by SamSteiner (talk | contribs) (added image)
(diff) ← Older revision | Latest revision (diff) | Newer revision → (diff)
Jump to navigation Jump to search
A checked version of this page, approved on 30 September 2017, was based on this revision. 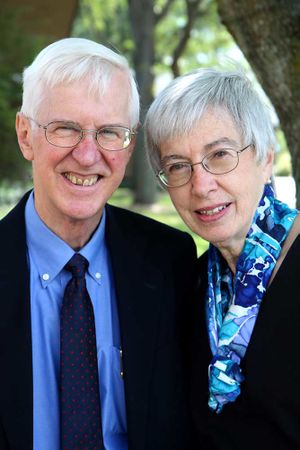 Alan grew up in an academic community; his father, Carl, was a professor at Goshen College when Alan was born, and served as the dean of the college for over 25 years. The family lived in Tokyo, Japan from 1952 to 1956 when Carl Kreider was the first dean of International Christian University. These have been described as formative, but difficult, years for Alan. He graduated from Goshen College with a BA in History. He earned graduate degrees at Harvard University, with an MA (1965) and a PhD in English History (1971). His dissertation was, "The historical setting of the dissolution of the English chantries." Alan also studied at Princeton University (1962-1963), Heidelberg University (1963-1964), and the University of London (1966-1968).

On 19 June 1965 Alan Kreider married Eleanor Graber Nase. Eleanor Louise "Ellie" Graber (16 November 1935- ) was the daughter of Joseph Daniel "J. D." Graber and Minnie Swartzendruber Graber, who were missionaries to India and later mission board leaders. Eleanor completed a BA in Music at Goshen College in 1957, and a MA in Music in piano performance at the University of Michigan in 1962. She taught piano at Goshen College beginning in 1957. She married Richard Nase (4 September 1936-24 December 1961), a music student she met at Goshen on 28 June 1958. However, Richard died of leukemia in a little over three years. Their daughter, Joy Ellen Nase (31 December 1959-6 August 1963), also died of cancer. Grief shaped Eleanor's life deeply in those next years. Alan Kreider was one of her friends and conversation partners during this time. Their formal courtship began in 1964 while Alan was studying in Heidelberg. They were married on 19 June 1965, and had one son, Andrew Joseph.

Alan returned to Goshen College to teach history from 1968-1972, while Eleanor taught in the music department. Alan and Eleanor then returned to London, England for further research with funding from the American Council of Learned Societies Fellowship. During this time, they embraced a change in focus, after an approach by Wilbert Shenk of the Mennonite Board of Missions (MBM). In 1974 Alan and Eleanor Kreider began providing leadership to the ministry at the London Mennonite Centre, then administered by MBM. For five years Alan remained a quarter time on Goshen College's faculty, teaching both in Goshen and London. Until 1991 Alan and Eleanor provided joint leadership to the London Mennonite Centre. They helped to begin the London Mennonite Fellowship, and on 23 March 1975 Alan was ordained as the pastoral leader of the Fellowship.

During these years Alan had opportunity to speak publicly on issues of war, peace, and discipleship, especially during the Falklands War in 1982. This helped to increase interest in Anabaptist theology among Christians in the largely secular English context. In 1992 Alan helped to shape the Anabaptist Network, which brought together a variety of persons from different faith communions. In 1991 Alan and Eleanor moved to Manchester where he taught at the University of Manchester and was Theologian in Residence at the Northern Baptist College. In 1995 they moved to Oxford, where Alan served as director of the Centre for the Study of Christianity and Culture at Regent's Park College and a member of the Oxford University Theology Faculty. During these years Eleanor was also a tutor in worship and liturgy.

In 2000 Alan and Eleanor Kreider moved to Elkhart, Indiana and became travelling mission educators for the Mennonite Mission Network (a successor to Mennonite Board of Missions), serving until 2004. At the same time Alan taught as an adjunct professor at Anabaptist Mennonite Biblical Seminary, beginning already in 1997, and joined the faculty as an Associate Professor of Church History and Mission in 2004. He retired in 2009 to devote more time to writing. Eleanor was ordained in November 2010 for her ongoing ministry in the Mennonite Church. Alan Kreider died 8 May 2017 at his home in Goshen, Indiana after being diagnosed in December 2016 with multiple myeloma.

Alan and Eleanor Kreider worked as a team throughout their lives, and came to give many joint sermons and presentations. Their contrasting styles worked well together.

Stanley Green of the Mennonite Mission Network said, "Alan was distinguished by a deep and abiding passion for God’s mission that was marked by a sincere thoughtfulness, a profound ecumenicity of spirit, and a gentle and kindly hospitality in his engagement with others."

Books written or edited by Alan and Eleanor Kreider

Hornus, Jean-Michel. It is not Lawful for me to Fight: Early Christian Attitudes towards War, Violence and the State, rev. ed. Translated by Alan Kreider and Oliver Coburn. Scottdale, Pa.: Herald Press, 1980.

Kreider, Eleanor. Communion shapes Character. Scottdale, Pa.: Herald Press, 1997. Republished in England as Given for you: a fresh look at communion.Leicester: Inter-Varsity Press, 1998.

--, and Donald A. Hay, eds. Christianity and the Culture of Economics. Cardiff: University of Wales Press, 2001.

Kreider, Alan. Social Holiness: A Way of Living for God’s Nation (foreword by Dale M. Coulter, a new edition of Journey Towards Holiness) Eugene, OR.: Wipf and Stock, 2008.

--. The Patient Ferment of the Early Church: The Improbable Rise of Christianity in the Roman Empire. Grand Rapids: Baker Academic, 2016.

A complete bibliography of books and articles written or edited by the Kreiders through 2011 is found in Forming Christian Habits in Post-Christendom: The Legacy of Alan and Eleanor Kreider: 205-225.