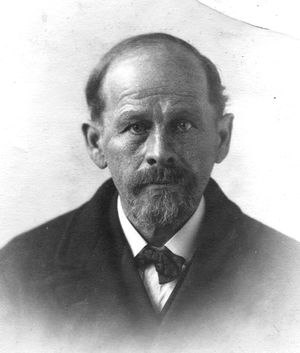 Abraham Jakob Kroeker: minister and writer of the Mennonite Brethren Church; born 11 December 1863 in Rosenort, Halbstadt District, Molotschna Mennonite settlement, South Russia, the son of Jakob and Sarah (Wiens) Kröker. He received some secondary education by private instruction, and at 17 began his teaching service in Mennonite village schools, 1881-88. He was converted at 19 and joined the Mennonite Brethren Church. In 1891 he went to Rumania for three years as a missionary. He married Agatha Langemann on 10 September 1892 in Spat, Crimea. To them nine children were born. In 1894 he established his home at Spat, Crimea. Here his chief occupation for ten years was farming. He moved to Halbstadt in 1904.

In 1897 Kroeker entered publication work, in part with his cousin, Jakob Kroeker. From 1897 to 1918 he published the Christlicher Familien-Kalender, 1900-1905 the Christliches Jahrbuch, and 1899-1917 the Christlicher Abreisskalender, all of which were widely circulated among Mennonites in Russia as well as in America. From 1903 to 1920 Kroeker edited and published the Friedensstimme, the organ of the Mennonite Brethren Church in Russia, which had, however, a much wider circle of readers. In 1904 he was one of the founders of Raduga, a publishing house at Halbstadt, Molotschna, of which he was manager until 1920.

Kroeker left Russia in 1921, came to America in April 1922, by way of Constantinople, lived in Winnipeg, Manitoba a year; then moved to Mountain Lake, Minnesota, his family following in 1924. Here he established and operated a bookstore a number of years and also for some time was joint editor of Der Mithelfer with N. N. Hiebert.

Kroeker died at Mountain Lake on 22 November 1944, and was buried there.