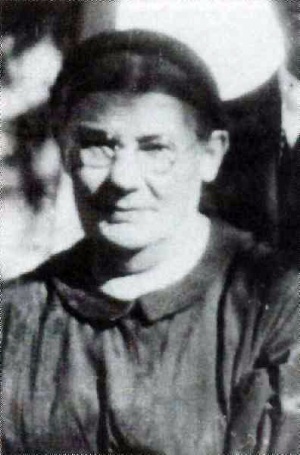 Katherina Toews Kroeker: Mennonite pioneer; was born on 13 July 1866 in the village of Steinbach, Borozenko Mennonite Settlement, South Russia. She was the third of nine children born to Peter Toews (1839-1882) and Elizabeth Reimer (1843-1918). Katharina was baptized into the membership of the Kleine Gemeinde by Ältester Abraham L. Friesen. In 1884 she married Cornelius P. Kroeker (1862-1942) who was part of a very prosperous farming family. Together they had 14 children, of which 12 survived to adulthood—seven sons and five daughters. Katharina died in Steinbach, Manitoba on 16 January 1938.

Although born in Russia, Katharina immigrated with her family to Canada in 1874 at the age of eight. They settled on the East Reserve in Manitoba where Katharina attended school in the village of Steinbach. Unfortunately the rigours of pioneer life were too great for her father and he died in 1882. After his death much of the farm work had to be done by Katharina and her younger brother Peter. Though these were difficult times Katharina was blessed with "a strong character and a good sense of humor" which saw her through. Although life became much easier after marrying, it was not without its hardships.  Katharina’s first two children died in infancy.  Katharina hosted many "visiters, salesmen, refugees ..." in her home. Her widowed mother came to live in a little house they had built for her on their yard and Katharina cared for her until she died during a flu epidemic in 1918. Katharina’s life stands as an example of the perseverance and mutual concern which allowed these Mennonite pioneers to thrive and prosper in a new land.