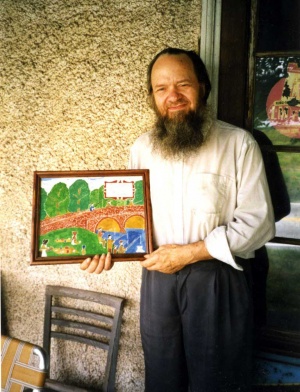 Isaac Clarence Kulp, Jr.: historian, antiquarian, folk artist; was born Christmas Day, 25 December 1938, the only living child of Isaac Clarence, Sr. (24 August 1900-2 August 1983) and Elizabeth "Bessie" Gottshall Kulp (12 February 1901-24 June 1986). His parents were storekeepers in the village of Vernfield near Harleysville, Pennsylvania. He never married, but lived together with his parents until their deaths. He died 5 August 2007 in Pennsburg, Pennsylvania.

Isaac (the name he preferred in later life) Kulp’s work of preserving the old stories of southeastern Pennsylvania was important to the memory of the Franconia and Eastern District Mennonite Conferences in the mid-20th century. In a time when the community was losing much of its cultural and spiritual memory, he grew up, influenced particularly by his mother, as one of the rare few who could recognize information around him that was worth preserving, and when it was important to record it.

After dropping out of his first year of high school, Isaac showed an extraordinary interest in and ability to explore his Pennsylvania German and Church of the Brethren/Mennonite heritage. Deeply self-taught in Pennsylvania spiritual history, he learned to read not only the printed German language but the archaic cursive script of documents he collected or found in homes and archives.

As a protégé of fellow Church of the Brethren member Robert Bucher, and along with Mennonite friend Alan Keyser, Isaac spent a lifetime collecting and interpreting. On invitation from many academic or folk organizations, he became a familiar face at lectures, church services, and festivals connected with the Pennsylvania German experience. Academics beat a path to his door, and he was invited to preach sermons in "Pennsylvania Dutch."

In his twenties, Isaac took on the specific plain Brethren garb that would eventually link him visually to the well-known 19th century bibliophile, Abraham Harley Cassel of the same community. Isaac served as a founding member and officer of the Goschenhoppen Historians, tending the folk history of the Goschenhoppen region between Hereford and Harleysville. Informally he gathered the “Goschenhoppen Sing-Schieler” (Singing Scholars), from 1980 to 2000, and taught them forgotten hymns from the Mennonite tradition and other Pennsylvania German churches.

Finding the local tradition of Fraktur of central interest, Isaac became a frakturist himself. Beginning with basic certificates and bookplates, he advanced to producing colorful watercolors of scenes from folk-memory, eventually creating nearly 300 pieces. He has been called the "Grandma Moses" of the Goschenhoppen community. Isaac served as a main consultant and translator for Mary Jane Lederach Hershey’s book on Mennonite school fraktur, This Teaching I Present. His remarkable collection of folklore notes, tape recordings, books, paintings, photographs and other manuscripts has been preserved at the Mennonite Heritage Center in Harleysville, Pennsylvania.

Gibble, June A. "Remembering How It Was: An Interview with John Lapp and Clarence Kulp," in Called to Caregiving: A Resource for Equipping Deacons in the Believers Church. Elgin, IL: Brethren Press, 1987: 39-47.

Kulp, Isaac Clarence, Jr., ed. A Brethren Pilgrimage: A Tourist’s Guide and Manual to the Historic Sites of the Early Brethren in Southeastern Pennsylvania…. n.p., 1976.