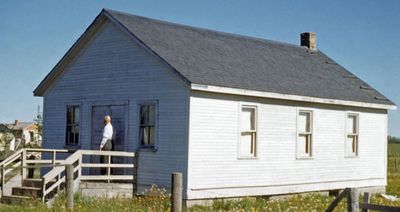 The Lashburn Mennonite Brethren (MB) Church, located close to the Alberta border on the highway between North Battleford and Lloydminster in Lashburn, northern Saskatchewan, was a member of the Rosthern District of the Canadian Conference of the Mennonite Brethren Churches. The congregation originated through outreach by Western Children's Mission. The settlers in this mixed farming community met at first in homes in 1936 under the leadership of H. S. Rempel and formally organized on 20 January 1937. The first church leader named in Saskatchewan Conference yearbooks was A. A. Polinsky. In 1938, when the church had a membership of 35, they bought an immigration building for a church at a cost of $525.00. After the building burned down on 17 June 1939, the members met in the United Church until about 1943 when a new church was built. By 1945 there were only 18 members. The language of worship was English; the transition from German occurred in the 1940s.

Representatives of the Maidstone MB Church and the Lashburn MB Church held a special meeting in 1964 to discuss the possibility of amalgamating but they decided against this union. On 29 November 1964, when Paul J. Wiebe a high school teacher in Lashburn was the pastor, the 28-member Lashburn church dedicated a new church building in town. In 1966 the membership of the Lashburn Church had risen to 40. The last entry in the Saskatchewan MB Conference yearbooks for Lashburn is in 1980 when the membership was 15. In 1982 the remaining eleven members were encouraged by the Saskatchewan Mennonite Brethren Conference of Church Ministries to transfer to other churches.