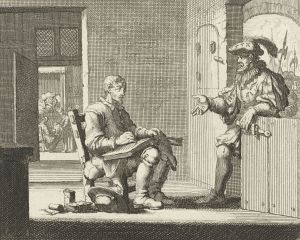 Laurens (Lauwerens) van der Leyen (Verleyen), an Anabaptist martyr, was beheaded on 9 (or 4?) November 1559 at Steen Castle at Antwerp, together with Mattheus de Pottebakker and Andries Langedul. Their names are found in the song, "Aenhoort Godt, hemelsche Vader," No. 16 of the Lietboecxken van den Offer des Heeren, where Laurens is called Lauken. He was a native of Ghent and probably belonged to the van der Leyen family, of which a number of members suffered martyrdom. Van Braght included in the Martyrs' Mirror four letters by Laurens van der Leyen, which he wrote in prison on 25 May, 10 July, undated, and 25 October. The first letter is addressed to the congregation at Emden, Germany, where two of his brothers lived; the second to the congregation of Antwerp, to which apparently also the third is written; the fourth to a brother of this congregation. These letters contain a number of important facts. Laurens was arrested on 21 May 1559. He was tried several times, but apparently not tortured. The inquisitors who interrogated him were a man named Claes, then the "Dean of Ronse," i.e., Inquisitor Titelmann, and the Margrave of Antwerp. Laurens defended his faith with a strong conviction and much ability. "When I used to gamble and get drunk, and to follow the world," Laurens said, "I was left unmolested; but now that I truly confess the name of God, I am persecuted." He had also been arrested some time before, because he had sung geestelycke Liedekens (spiritual hymns); why he then was released is not stated.

The inquisitor threatened him several times with cruel death and said to him: "You certainly know. . . that I caused your sister (i.e., Tanneken van der Leyen) to be thrown into the Scheldt River." But neither threats nor supplications could make Laurens renounce his faith, which he strongly confessed. He had not yet received his baptism on faith. "I was," he said, "not yet good enough." The Martyrs' Mirror also contains his confession of faith, delivered on 4 July 1559. In this confession he defends the doctrine of Incarnation as taught by Menno Simons. A number of members of the congregation of Antwerp were in prison with Laurens, the names of whom he gives in the third and fourth letters, and many of whom faithfully suffered martyrdom after Laurens had been put to death. They could observe how Laurens was executed and died as a true follower of his Lord.

Braght, Thieleman J. van. The Bloody Theatre or Martyrs' Mirror of the Defenseless Christians Who Baptized Only upon Confession of Faith and Who Suffered and Died for the Testimony of Jesus Their Saviour . . . to the Year A.D. 1660. Scottdale, PA: Herald Press, 1951: 633-640. Available online at: http://www.homecomers.org/mirror/index.htm.