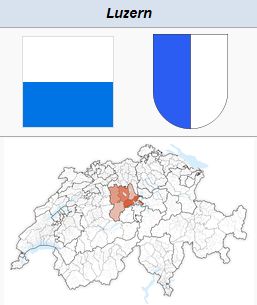 Lucerne, is a canton in Switzerland (pop. 223,409 in 1955; pop. 350,600 in 2001), predominantly Catholic. The Reformation found no entry here. Lucerne headed the Catholic cantons and in the religious wars it led the Catholic party.

The Lucerne Council took severest measures to suppress the Anabaptist movement. In 1525, the year of the birth of the brotherhood, Johann Krüsi died at the stake at Lucerne as the second blood witness of the Swiss Brethren, Eberli Bolt having been executed a few months previously in Schwyz. Julius Lober in his list mentions two martyrdoms in Lucerne in 1531 by drowning (Beck, 311). Orderly court procedures in religious matters were excluded in Lucerne; a decision of the Catholic cantons of 10 June 1532 decreed that Anabaptists in their territory, if they did not desist from their false doctrine, were without ado to be put to death (Strickler, 589). How many Swiss Brethren became victims of this decree is not known. At the Lucerne Assembly of the Catholic cantons it was decided on 30 April 1560 to take steps against the Swiss Brethren at Appenzell, and the meeting in Baden in 1567 confirmed the resolutions of 1532 (Bergmann, 42).