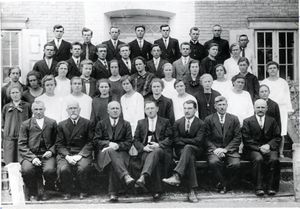 Baptism in the Alexanderwohl Church, Molotschna in the year 1930. Elder Janz (Landskrone) is in the centre of the first row.
Mennonite Heritage Centre Gerhard Lohrenz Photograph Collection (044-676).

The first elder was Heinrich Wiens (1842-1847), who was removed from his office when he opposed the reform efforts of Johann Cornies. For 14 years the congregation was cared for by Heinrich Töws, the elder of the Pordenau Mennonite Church. He was succeeded by Bernhard Peters (1861-1887), Heinrich Koop (1887-1901), Peter Friesen (1901-1907), Gerhard Plett (1907-1928), and Heinrich T. Janz (1928-1932). The last elder had to leave the congregation, because of the high taxes which neither he nor the congregation could pay. The congregational life gradually disintegrated because of the anti-religious attitude of the Soviet government. One of the last and most impressive services conducted was the ordination of Heinrich T. Janz as elder conducted by his retiring predecessor, Gerhard Plett, who had baptized 1,543 members during his 20 years of service. The ordination took place at the church at Landskrone on 13 May 1928.