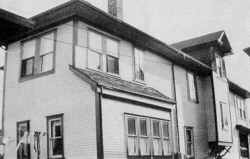 Established in 1925, Mary-Martha Home was a social and spiritual center for young Mennonite women who moved to Winnipeg to work as domestic servants. The Home was an outgrowth of the Winnipeg city mission of the Mennonite Brethren Northern District Conference. Anna Thiessen, a Mennonite Brethren (MB) missionary in Winnipeg, began a Thursday evening sewing circle for Mennonite women around 1916 and within nine years this sewing circle had expanded in size and function to become the Mary-Martha Home. At first rooms were rented, but in the early 1930s a house at 437 Mountain Avenue was purchased, providing a home for young Mennonite women working in the city. 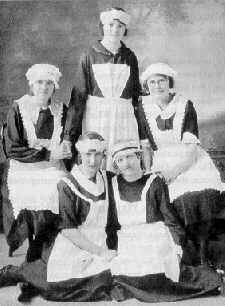 While a small number of young women did live in the house for longer periods of time, the home served mainly as short-term accommodation for young women who were in between jobs or for those who were newly arrived in the city and looking for employment. The Home provided a place for young women to gather and socialize on their days off, and regular Bible studies were held by Mennonite ministers. The Mary-Martha Home also served as an employment agency, helping young women find work and, when the need arose, removing young women from working situations in which they were mistreated. The Dorcas Circle, organized in 1929, arranged for the young women to do handwork for mission or relief and for visiting the sick. Anna J. Thiessen was matron of the home 1925-47. Other workers in the Home included Mary Klassen (married name Wiens), Katie Guenther (Neufeld), Sarah Warkentin (Voth), Elizabeth Unruh (Friesen), Lena Isaak (Sawatzky), Tina Friesen, Mary Klassen, Lena Bargen, Bettie Enns, Anne Thiessen, Elsie Falk, Martha Thiessen (Schulz), Katie Fast, and others. 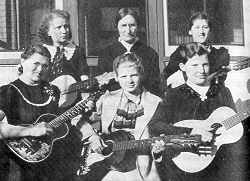 In 1948 supervision of the Mary-Martha Home was taken over by the Manitoba Provincial Conference of the MB Church. In 1949 there were 12 young women in the home, while 117 others who were working and living in other locations were connected with the home. A variety of changes after World War II, however, slowly diminished the need for the services offered by the Home. Most domestics began working only during the day and no longer lived in their employers homes. This allowed them more free time to develop their own social networks. Many Mennonite young women also began to find different kinds of employment, including work as secretaries, salesclerks, and factory workers. Since an increasing number of Mennonites were moving to the city, Mennonite churches grew rapidly and offered more developed programs for Mennonite young people in the city. When the Mary-Martha Home closed in 1959, more than 2,200 young women had benefited from its services.