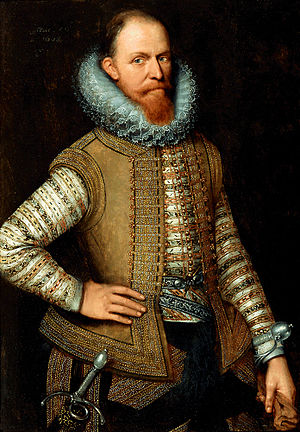 Maurice of Nassau (Maurits van Nassau): Prince of Orange; born 14 November 1567, the son of William the Silent and his second wife Anna of Saxony (the daughter of Elector Maurice of Saxony). After the death of his father in 1584, Maurice succeeded him as stadtholder of Holland and Zeeland, and in 1590 he became stadtholder of Utrecht, Guelders and Overijssel. He became stadtholder of Groningen in 1620, and succeeded his older brother Philip William as Prince of Orange in 1618. Maurice died 23 April 1625 and was succeeded in most of the Dutch provinces by his youngest brother, Frederick Henry.

Maurice continued the struggle with Spain with vigor, displaying more talent as a general than as a statesman. In his later years he was a fanatical Calvinist, though probably from political rather than religious considerations, and as such he persecuted the Remonstrants. Toward the Mennonites he was tolerant. When the magistrate of Middelburg oppressed the Mennonites living in that city, and Maillaert de Poorter and Joost Leonisse (Joos Loysen) in the name of the Mennonites appealed to the prince, he wrote a letter dated 4 March 1593 ordering the Middelburg authorities to leave to the Mennonites all the liberties his father had granted them. As Duke of Mörs and Lord of Krefeld, he also protected the Mennonites of this area in 1622 against his bailiff Sterckenburg, who wanted to execute the Mennonites of Krefeld for holding meetings.