From GAMEO
Revision as of 05:14, 1 December 2017 by RichardThiessen (talk | contribs) (Added hyperlink.)
(diff) ← Older revision | Latest revision (diff) | Newer revision → (diff)
Jump to navigation Jump to search
A checked version of this page, approved on 1 December 2017, was based on this revision. 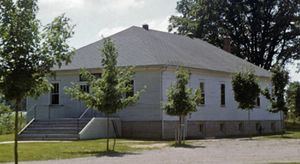 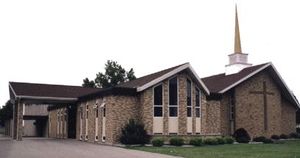 Among the first Mennonites to arrive in the Leamington, Ontario area were Heinrich and Nicolai Schmidt with their families. Heinrich was a member of the Mennonite Brethren church. Realizing the need for spiritual fellowship, as they had experienced in Russia, the new arrivals met for worship in private homes regardless of Mennonite denominational affiliation. These services in German were often held without ministers being present.

Isaac Tiessen, who had been an Evangelical Mennonite Brethren minister in Lichtfelde, Russia, arrived and was asked to serve the new group. Occasionally ministers such as Jacob Friesen and Jacob H. Janzen from Waterloo and Kitchener, also ministered to the growing congregations which soon began to meet in rented facilities.

This congregation of 50 members gathered every Sunday for morning and evening services. It formed a young people's group, and held mid-week Bible study and Saturday evening prayer meetings. The early services in rented facilities, usually above a business establishment, required preparation and setup for every service.

Sunday School had been an integral part of the Mennonite Brethren Church in Russia, and this continued in Canada. Daniel Boschman served as an early leader with great success, followed by Henry Thielman, David Derksen, Cornelius Hamm, and many other men and women who faithfully served in this important work.

The increase in Leamington MB's membership led to the purchase of land and then building of a church. On 11 June 1939 the membership delegated the brethren, Gerhard Dick, Frank Bartel, Gerhard Willms to purchase property on Elliot Street. Contractor J. Thiessen with volunteer labour from church members fnished the building at a cost of $3,500 in time for the 1939 Christmas Eve celebration. An addition was built in 1958, but the property was subsequently sold. The present church was completed in 1965 and expanded in 1979. Another expansion was being considered in 2003.

The Leamington Mennonite Brethren congregation's earliest activities centered on its internal spiritual needs through evangelistic meetings, Bible conferences, Jugend Verein and choirs. As time went on, this expanded to include a radio ministry for ten years, a Daily Vacation Bible School, Bible clubs, and boys' and girls' clubs. The church has actively supported local food banks and the distribution of clothing through thrift outlets like New to You, Et Cetera and others.

The congregation has also been engaged in expansion of its ministry. In 2003 Laotian immigrants, sponsored by neighbouring churches and individual families, worshiped in the facilities as a separate congregation. A youth pastor has helped to start the South Point Community Church in Leamington.

For a time two Sunday morning services were held with slightly different worship styles, but by 2003 this had returned to one service. Baptisms, which were once held in Lake Erie, are now conducted in the church baptistry. Worship services for the seniors in the Leamington Mennonite Home and other retirement homes are regularly provided. Originally the preaching was provided by members within the group -- Isaac Tiessen, Abram Huebert, Wilhelm Toews, Peter Friesen, Jacob Kroeker and David Derksen. Isaac Tiessen, who was ordained in 1935, became the first salaried pastor. Services were held in German until the 1950s when the transition to English began.

The congregation changed their name to Meadow Brook Fellowship in 2004.

Archives are at the Centre for Mennonite Brethren Studies