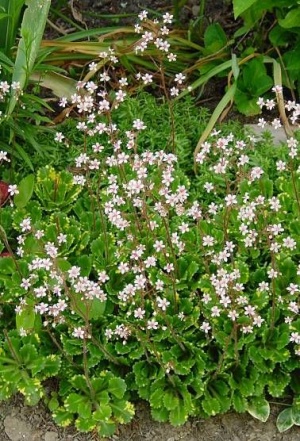 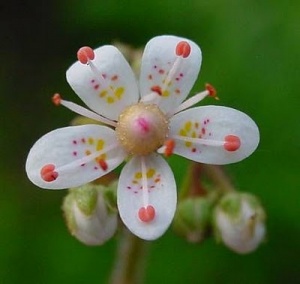 The "Menniste zusje" (genus: Saxifraga Umbrosa) is a flowering alpine perennial plant with low-growing leaves and a single reddish flowering spear that can be up to 35 cm long. Flowers at the tip of the spear are quite small, approximately one centimetre across, light pink with five petals. Leaves are elliptical with rounded crenation at the margins and arranged in a rosette. It and its cultivars are popular in shady rock gardens.  In Netherlands "Menniste zusje" (Mennonite little sister) is its common name. A variety of English versions of this plant’s name include: Pyrenees Saxifraga, London Pride or Pretty Nancy.

Mennonite women from the 17th to 20th centuries, when they became well established and wealthy, did not decorate their clothing with large showy flowers like sunflowers, tulips or roses but instead chose small simple flower patterns to fit with their desire to live modestly. The preferred flower for decoration was the Saxifraga Umbrosa.  It was because of this frequent use by Mennonite women that the plant became known as the “Menniste zusje.” From the 17th century on "Menniste zusje" also became an idiomatic expression in Dutch literature and was used in stereotyping Mennonite women. It developed the meaning of a young woman dressed plainly and modestly in Mennonite fashion, who was apparently virtuous, serious and shy, but yet contravened the community boundaries and her own moral conventions. In 1913 Christiaan N. Wybrands published a study on this material in a book titled: Het Menniste Zusje (#53 Jaarverslag van het Koninklijk Oudheidkundig Genootschap te Amsterdam).