From GAMEO
Revision as of 10:41, 5 April 2020 by SamSteiner (talk | contribs) (wikified tables)
(diff) ← Older revision | Latest revision (diff) | Newer revision → (diff)
Jump to navigation Jump to search
A checked version of this page, approved on 5 April 2020, was based on this revision. 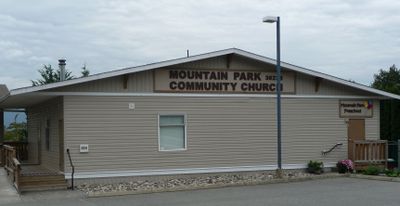 Mountain Park Community Church originated through the outreach of the British Columbia (BC) Conference of Mennonite Brethren (MB) Churches Board of Extension who, along with local families, desired to plant a church to serve the needs of East Abbotsford. On 29 April 1991, approximately 140 local people attended the first "interest meeting" at Nazarene Church on McMillan Road. Many of the families came out of the Central Heights congregation.

Mountain Park had their first worship service on 8 September 1991 in the rented gymnasium of Yale Secondary School. The congregation joined the BC MB Conference in 1992. After purchasing 7.44 acres of land, the congregation soon occupied its first building in December 1994.

In 2010 the congregation had 175 members and an average weekly attendance of 246.