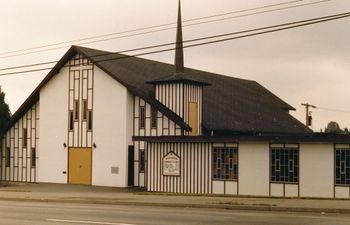 In early 1951 several individuals associated with First United Mennonite Church in Vancouver expressed a desire to plant an English speaking church in Vancouver. The idea was highly controversial but a vision for this church plant was nurtured by Henry H. Neufeld, who at that time was principal of Bethel Bible Institute in Abbotsford. Neufeld was appointed by the Home Mission Board of the Conference of Mennonites in Canada and together with 13 interested families, services began in August 1952.

The group was able to purchase four lots on the corner of Fraser Street and 31st Avenue in the fall of 1952 and the first service was held in a newly completed basement on 23 December 1953. The sanctuary was completed in April 1955 and a dedication service was held on 19 June 1955. An important part of the congregational experience was the construction of the building. Church members undertook the construction themselves. Members dismantled former military buildings and used the reclaimed lumber for the new building.

The new church, known initially as Vancouver Mennonite Mission, formally organized on 18 March 1956 with 63 members. The congregation experienced significant growth in the 1960s, and in the fall of 1964, work was begun on a new education wing to accommodate a Sunday school enrollment of approximately 250.

Changing urban demographics, including rapidly rising housing prices, subsequently led to some members moving to other locations in the Greater Vancouver region. As an aging congregation with declining membership and limited financial resources, the congregation voted to close its doors in February 1996. Remaining members dispersed to other congregations.

The congregation is remembered through the Mountainview Fund of Mennonite Church BC.  By a decision of the final members, proceeds from the sale of the church building were used as an endowment fund for future urban ministry in the region.

Churches in Profile. Abbotsford, BC: Conference of Mennonites in British Columbia, 1978: 76-80.

Conference of Mennonites in British Columbia