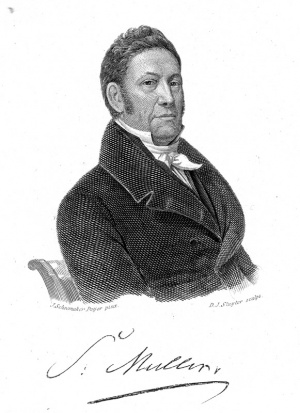 Samuel Muller (1785-1875), a Dutch Mennonite theologian, was born in Krefeld, Germany, on 18 January 1785. He was a son of Christian Muller and Elisabeth Schmidt. His mother died when Samuel was only six years old, his father when he was nine. In Krefeld he spent a "youth without joy," went to Amsterdam in 1801 to study theology at the Mennonite Seminary under Gerrit Hesselink and ancient languages at the Athenaeum under van Lennep. The regular services of the Amsterdam Mennonites did not satisfy him. "His heart had needs which could not be filled by the offerings of the preachers" (Sepp). He was appointed ministerial candidate and served at Zutphen.

Samuel Muller preached his first sermon on 6 December 1806, at Zutphen; in 1809 he went to Zaandam-Oostzijde, and in 1814 he was called to Amsterdam. His work here was fraught with blessing. Although he stood on a basis of evangelical supernaturalism, he considered the orthodox pietism of his colleague Jan Der Borg such a threat to the brotherhood, that he felt compelled to raise his voice in warning. (See Muller's letter to the church council, Doopsgezinde Bijdragen 1897, 27 f.) Ter Borg resigned.

Meanwhile Muller in 1827 succeeded Rinse Koopmans as professor at the seminary. At his request Wopko Cnoop Koopmans, Rinse's son, was given the other Mennonite professorship. On 7 October 1828, he delivered an inaugural address in Latin, Oratio de muneris sancti ratione recte aestimanda (Concerning the Virtue of Reason in Sacred Matters) (Amsterdam, 1829). Muller lectured in dogmatics, pastoral theology, and Mennonite history. In the field of history he was a pioneer. He not only wrote articles on the subject himself, but succeeded in interesting a number of his students in the history of the church. He began to systematize the comprehensive [[Amsterdam Mennonite Library (Bibliotheek en Archief van de Vereenigde Doopsgezinde Gemeente te Amsterdam)|library in Amsterdam]], finding many a valuable document in the process. In 1854 he published the first catalog of the Library. He was editor of the [[Naamlijst der tegenwoordig in dienst zijnde predikanten der Mennoniten in de Vereenigde Nederlanden|Naamlijst]] of 1829 and published in 1837, 1840, and 1850 a Jaarboekje voor de Doopsgezinde Gemeenten in de Nederlanden, commonly called Muller's Jaarboekje. Of the edition of 1837 he was the sole author. Here, after a list of congregations and ministers, there were four studies in Mennonite history, on the names "Mennonites" and "Doopsgezinden," on Dutch Mennonite editions of the Bible, on the relation between the Mennonites and the Dutch government, and on the lay ministry among the Mennonites; he wrote on the importance of Dutch Mennonite history and on some poems of Vondel (published in Doopsgezind Jaarboekje 1840), and an excellent paper on the history of theological training among the Dutch Mennonites (Doopsgezind Jaarboekje 1850). His greatest strength, however, lay not in the field of history, but in pastoral theology, especially homiletics.

Until 1836 Muller remained a preacher of the Mennonite congregation in Amsterdam. When he resigned he published a collection of sermons, Leerredenen. From then on he could devote himself entirely to the education of future ministers, and he did this with great devotion. It was his aim to raise the Mennonite brotherhood and its preachers to the same level of learning as that of the other churches: he succeeded, as he reports in the Doopsgezind Jaarboekje 1850, 188.

In addition to his work as an educator Muller found time to serve in other capacities. He was for many years on the directing board of the Association for the Common Welfare (Maatschappij, tot nut van't algemeen), the Dutch Bible society, and the Teyler Theological Society. He lent a strong hand in the founding of the Algemene Doopsgezinde Sociëteit (Dutch General Conference) in 1811, and gave the festival address at the celebration of the fiftieth anniversary of the society; he was active in organizing the Dutch Mennonite Mission Society in 1847 and for many years served as its chairman.

Muller wrote relatively little, for he felt himself called to work within the Mennonite brotherhood rather than the outside world. He wrote a number of historical articles in Doopsgezind Jaarboekje and Doopsgezinde Bijdragen; a number of articles for other magazines, some criticisms, three biographical sketches for the Society for Dutch Literature, a volume of sermons, also Feestrede ter viering van het 50 jarig bestaan der A.D.S. in 1861, and De Geschiedenis van het ontstaan en de Vestiging der A.D.S. (n.p., Amsterdam, 1861). Twice the University of Leiden conferred an honorary doctor's degree upon him, in philosophy in 1827, and theology in 1836.

In 1844 Muller sharply criticized J. H. Halbertsma who attributed the decay of the Dutch Mennonites to their "obsolete orthodoxy" (see Muller's Beoordeeling van eenige Kerkredenen van J. H. Halbertsma, Amsterdam, 1844), and when shortly after 1850 Professor Jan van Gilse introduced liberal theology into the Amsterdam Mennonite Seminary and about 1870 Liberalism had penetrated into most of the Dutch congregations, Muller was earnestly grieved and occasionally sounded a warning note.

In 1856 Muller resigned from his chair at the seminary. He was of more than ordinary importance, wielding a wide influence upon the brotherhood and helping individual congregations in need. His was a powerful, positive personality with a determined will.   This virtue, practiced to excess, led to a sharpness of utterance and a hardness that estranged many from him, including some of his students. His aspiration was always rather in the direction of high attainment than of winning personal approval. Nevertheless he was always able to distinguish between a cause and the personalities involved, as is shown by his friendship for ter Borg, even after the latter had begun to entertain views that seemed ruinous to Muller; and likewise when Jan de Liefde, under the influence of the pietistic "Reveil" (revivalism), in 1845 left the church and severely criticized the spiritual conditions of the Dutch Mennonite brotherhood. A stenciled copy of Muller's diary is found in the [[Amsterdam Mennonite Library (Bibliotheek en Archief van de Vereenigde Doopsgezinde Gemeente te Amsterdam)|Amsterdam Mennonite library]].

On 15 April 1812 Muller married Femina Geertruida Mabé, a widow from Haarlem. She died in 1870, leaving eight children. Muller's descendants include a number of important scholars.