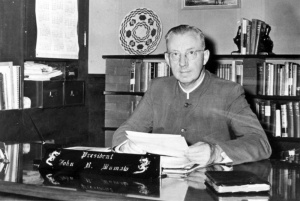 In 1920 John R. Mumaw’s mother Catherine sent him from the family home in Ohio to attend Eastern Mennonite School (EMS) in an effort to reform her teen-age son. John had resented the loss of his father as a toddler. He first resisted the overtures of the EMS faculty, but had a vision of flames beneath his feet leading to a genuine conversion experience.

After graduation Mumaw taught elementary school in Ohio before returning to EMS in 1925. He taught at EMS while taking classes at Eastern Mennonite College. In 1928 Mumaw earned a bachelor’s degree from Elizabethtown College in Pennsylvania. He later earned a Master’s degree at American Theological Seminary and a doctorate at Elizabethtown.

John R. Mumaw achieved faculty status at EMS in 1927. He primarily taught English and Bible classes before being named the fourth president of Eastern Mennonite College. “Brother Mumaw” served as president from 1948 to 1965. During his tenure, EMC achieved accreditation through admittance into the Southern Association of Colleges and Secondary Schools.

Mumaw served in additional roles as chair of the Mennonite Commission for Christian Education (1946-1955); President of the Council for Advancement of Small Colleges (1964-1965); and executive secretary of the Mennonite Medical Association (1969-1979). He was also instrumental in the formation of Pleasant View Homes (now Pleasant View Inc.) and Virginia Mennonite Retirement Community.  Mumaw’s books include Assurance of Salvation, The Resurrected Life, Preach the Word, and Answers to Anxiety.  He edited Christian Ministry, Program Builder, and the missions section of Gospel Herald.

Warkentin, A. and Melvin Gingerich, compilers. Who's Who Among the Mennonites. North Newton, KS: Bethel College, 1943: 177.

John Rudy Mumaw, b. 12 March 1904, d. 20 June 1993, devoted his life to leadership in Mennonite (Mennonite Church) education. Collegiate and graduate studies prepared him for more than 40 years of teaching, mostly at Eastern Mennonite College and Seminary, in Bible, English, and practical theology, with a specialty in marriage and family life. From 1948 to 1965 he was president of the college and seminary. His tenure saw a doubling of enrollment, erection of major buildings, enlargement of curriculum, professional growth of faculty, progress toward a separate high school and a full seminary program, and membership in the regional accrediting association. He led in articulating a philosophy of education, with aims and objectives for the college. He directed the first long-range professional planning for the college and seminary and brought it into closer involvement with the larger Mennonite Church (MC) and into the wider educational world. He helped found and lead the Council for Advancement of Small Colleges.

Mumaw was also an evangelist, pastor, and leader in Virginia Mennonite Conference (MC) and in church-wide missions and service work. He edited the missions section of Gospel Herald, Program Builder, and Christian Ministry, and wrote Assurance of Salvation and The Resurrected Life.

He married Esther Moseman, with whom he had five daughters; after her death in 1964, he married Evelyn King, former Eastern Mennonite College dean of women.