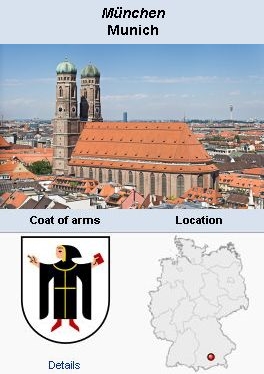 Munich (München), capital of Bavaria, Germany, (1950 population, 831,017; 2012 population, 1,388,308; coordinates: 48.133333, 11.566667 [48° 8′ 0″ N, 11° 34′ 0″ E]), in which there were Anabaptists for a time during the 16th century; like the Lutherans they were violently persecuted and subdued within a few years. Even before Emperor Charles V issued his mandate against the Anabaptists the dukes William IV and Louis issued one on 15 November 1527, "one of the strictest edicts ever passed in religious matters" (Winter, 16). As in other cities, most of their followers were craftsmen, some of whom became martyrs. As early as 1527 a small congregation was formed which met quietly in the suburbs. As soon as these meetings became known severe persecution set in. Until their trial those who were seized were thrown into the dungeon of the Falkenturm, a tower from which no one ever emerged without severe (capital) punishment; "some had their limbs cut off, some were beheaded, some were cast into the Isar and drowned, and some were burned alive at the stake" (Winter, 35).

One of the first martyrs burned at Munich was Georg Wagner of Emmering. He was executed on 8 February 1527 on the square of the Frauenkirche. His steadfastness made a deep impression and was described in a broadside of the day. It was repeatedly printed; it appeared in the Jahrbuch für die evangelisch-lutherische Landeskirche Bayerns (1906) and in the Rheinisch-Westfalischen Gustav-Adolf-Blatt of 1 February 1909, from a copy in the central library of Zürich.

This execution did not have the effect expected by the church and the government. After Wagner's execution Leonhard Dorfbrunner, a Teutonic Knight from Nürnberg, preached for a short time in Munich and baptized four persons there in the fall of 1527, Christof Schufler and his wife, and Georg Schachner (Nicoladoni, 206). The latter was chosen as head of the group, and had been a leader in the Augsburg brotherhood, helping to introduce a systematic care of the poor (Roth, 11 and 86).

After the decree of the dukes was issued, persecution increased in Munich. Three weeks later Martin Pasensner of Jesenwang was made inquisitor to seek the Anabaptists out (Winter, 30 and 177). In a short time he seized Augustin of Perwanger of Günzlhofen at Fürstenfeldbruck and his brother Christoph, who were beheaded on 7 January 1528, together with a miller (Beck, 24). On 28 January of that year six men were burned alive in a hut and the wives of two of them with a widow Baumgartner drowned and then burned (Jorg, 744 and Sender, 188). One of them, Hans Feyerer, was a preacher (Beck, 24). In the same year another Anabaptist preacher, Oswald Binder, and Buntzer, the head of the congregation, concerning whom nothing more is known, were beheaded at Munich (Roth, 84). Oswald may be identical with Oswald Schäffler, of whom the Hutterian chronicles say that he was a preacher and was beheaded in Munich in 1528 (Beck, 29).

But the number of Anabaptist martyrs in Munich was not limited to these 15 persons. A list compiled by the Hutterian Brethren in 1581 named only eight, and a supplementary listed three more (Beck, 277 and 310). A contemporary chronicler, Clemens Sender, in his Chronik der Stadt Augsburg, which extends to the year 1536, gave the number of martyrs as 32, commenting that the three women among them "were much more stubborn than the men" (Sender, 189). The last martyr to the in Munich was Christian Gasteiger, who was captured at Ingolstadt on 30 May 1586, and beheaded on 13 September at Munich.

The period of Enlightenment finally brought about a change in the treatment of religious minorities. Under Maximilian I Joseph an effort was made to settle Mennonites from Lorraine and the Palatinate in south Bavaria; several families settled near Munich and organized a congregation, meeting in the farm homes. After 1880 Mennonites from Baden also took farms in the neighborhood. The two groups united in 1892, and employed a preacher (Emmanuel Landes) with Regensburg and Eichstock. In 1939 the congregation had 130 members and 40 children, and in 1956 it had 185 baptized members and 32 children. In 1956 most of them were farmers, and lived in 18 villages. Services were held in a hall in Munich. The congregation belonged to the Vereinigung.