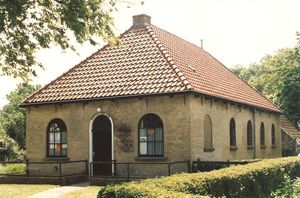 Nes, one of the three Mennonite churches on Ameland, a Dutch island in the North Sea, is smaller than the Hollum and larger than Ballum, the other congregations on the island. Leenaert Bouwens, who visited Ameland eight times, baptized only three in Nes, and those on his first journey, between 1551 and 1554. The Nes congregation belonged to a more lenient wing than the other two, and was therefore less interested in the stern Bouwens. In the division of 1557 between the stricter Flemish and Frisians on one hand and the more lenient Waterlanders on the other, the Nes congregation sided with the Waterlanders. In the 18th century this Waterlander congregation belonged to the Humsterland Societeit (see Groninger Doopsgezinde Societeit). In 1599 Jan Jacobs of Harlingen, who favored a stricter application of the ban, won some adherents at Nes, most of whom belonged to the Flemish group, but now turned to the Jan Jacobs faction.

For some unknown reason another division occurred in Nes probably about the middle of the 17th century, which led to the founding of the Foppe Onesor Laus Ooms congregation. In 1804 the Foppe Ones and Jan Jacobsz congregations united.