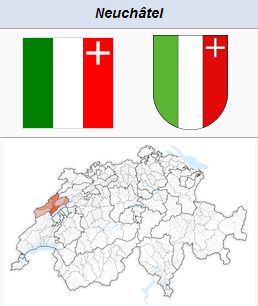 Neuchâtel (German, Neuenburg), a canton in northwestern Switzerland with an area of 305 sq. miles, consists of the former districts of Valagin and Neuchâtel. Neuchâhtel was open to the influence of the Reformation at an early date. Under the protection of Bern, with which Neuchâtel had been associated since 1406, William Farel brought the Reformation to the canton about 1530. It was a decisive victory for the Reformation that the princes and nobility all adopted the Protestant faith. It became the policy to tolerate only Protestantism, especially when Neuchâtel came under the rule of Friedrich Wilhelm I of Prussia in 1707 (until 1848).

Closely allied to the Swiss Confederation by old treaties and common interests, Neuchâtel was admitted into the Confederation in 1814 as the 21st  canton. A revolution freed it from Prussian domination in 1848, when the republic was declared. Since then freedom of religion and conscience has been assured and compulsory civil marriage introduced, and the registration of births made independent of the baptismal record.

The Anabaptist movement never reached the significance in Neuchâtel that it had in the cantons of Zürich and Bern, in part because of the difference in language, but it was for the Swiss Brethren a place of refuge when persecution reached its height in Bern. The date of the first immigration can no longer be ascertained, but by the middle of the 17th century many had escaped to the mountains of the canton. A few families wandered into the Val de Ruz and into the region of La Chaux de Fonds and Le Locle.

As in the Jura, the Anabaptists became pioneers in agriculture and cattle raising in Neuchâtel. Their success soon stirred up the envy of the native population; the competition led to an economic struggle against them. Ernst Müller wrote, "We find in the Neuchâtel Jura exactly the same social and political movement of the populace against the immigrants with their economic superiority as in the Bernese Jura."

The early 18th century brought a new influx of Mennonites, but also a renewed opposition to them. The complaints of the populace produced an order that the Mennonites then in the canton should be tolerated, but no others should be admitted. 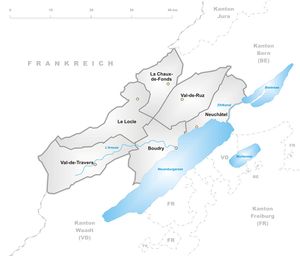 The mayor of Valagin is indeed said to have registered the complaint in Bern that church unity in the canton was threatened by the settlement of Mennonites, since a law of 1707 stipulated that the Protestant faith should be the only one tolerated. Negotiations between the government of Bern and Friedrich Wilhelm of Prussia resulted in the order on 21 April 1734 "that these Mennonites, Pietists, and Anabaptists shall be tolerated in view of the testimonial given them by the council that these people live as good citizens." Thereupon the Bernese government wrote to the governor on 21 December 1734, and to the Prussian council in Neuchâtel, that Valagin complained about the settlement of sectarians on its territory, and besought the governor to take the necessary steps to "get rid of these encumbering people." The king replied that the Mennonites were to be tolerated, both because of the good repute of their conduct and because it was wrong to persecute for their religion persons who live as good citizens. After further negotiations the king wrote, "Any spirit of persecution is obnoxious to me and I cannot understand why one wants to drive these poor people out of the country, since they do no harm to anyone and do nothing that could jeopardize the welfare of the state. They seem to me to be deserving of sympathy and it would always be more worthwhile to draw them to you with kindness and Christian love with a good example, than to deprive them of the refuge they have sought with you. It is therefore my wish that they be tolerated until I find it advisable and necessary to order otherwise." Finally the mayor of Valagin had to admit that there was no good reason for disturbing the Mennonites, and that they rather deserved gratitude for their industry and their general character.

But the noble intentions of the great king were not nobly accepted. Agitation against the Mennonites continued. The people of Valagin assembled, ostensibly to preserve their old rights and liberties, and the mayors of the villages and the council of Bern challenged the king. Thereupon the king replied on 4 June 1735 that those sectarians who had settled in Neuchâtel and Valagin since 1724 should be sent out in 1736, but very few families were hit by this arrangement.

In spite of all difficulties the Mennonites were able to maintain themselves in Neuchâtel, though

in some instances they changed their location. They came on Sunday from great distances to the spacious room of some farmer for mutual edification. For a long time the central point for such meetings was the hamlet Bressels near Locle (see Locle-Bressels).

In 1894 a suitable church was built under the direction of Elder Henri Ummel in Les Bulles near Chaux de Fonds, in which the Mennonites of the canton met, with about 150 members. From the 18th century on, the Mennonites of Neuchâtel adhered to the Amish wing.