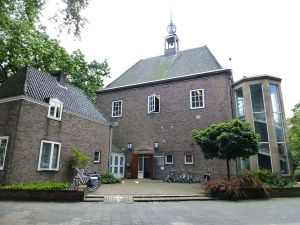 Nijmegen (German, Nimwegen) is a city in the Dutch province of Gelderland, which in 1951 had a population of 112,800 (231 Mennonites). The first mention of Anabaptists in this city occurs in 1539; on 19 April of that year three unnamed Anabaptist men were burned at the stake here, and shortly after that two women were drowned in the Waal River. Two other victims of persecution in this city are known: in 1557 (van Braght gives the year as 1556) Gerrit Hazenpoet was burned at the stake, and in 1569 (van Braght 1572) Jan (Johan) Block met the same fate. But the city government did not always take such strong action against the Anabaptists; as early as 1565 Jan van den Berg was expelled from the city with his whole family because he refused to have his children baptized.

The next mention of Anabaptists is made in 1639. The city, which had become predominantly Reformed, suffered a terrible epidemic of the plague in 1635-1637, losing about half of its inhabitants. It therefore considered bringing weavers in from other places for its linen weaving industry. During this time many Reformed came here from the duchy of Jülich, Germany, where they were oppressed because of their religious faith. Mennonites came too; in 1639 a Mennonite acquired the rights of citizenship, and two others in 1640. Instead of giving the customary oath they were received upon their vow of truthfulness ("by mannen-waerheyd"). In 1642 and the following years more Mennonite weavers came to Nijmegen from Jülich, who practiced their craft, becoming citizens in the same way. The number of Mennonites there in 1652 was considerable. The complaint of the Reformed to the government that the Mennonites were meeting regularly for services indicates that there was an organized congregation. In 1654-1657 new refugees came, strengthening the congregation, which Guyot estimates at 180 souls. The Mennonites of Nijmegen belonged to the United Flemish, Frisians, and High Germans and used this name although there were never any divisions there. After the Lamist-Zonist schism the Nijmegen congregation held to the conservative Zonist views. In 1664 Willem Kops, Jan Welsinck, and Pieter Willemsz signed the Verbondt van Eenigheydt in the name of the Nijmegen congregation.

A man of importance who did much to promote the financial status of the brotherhood was the deacon Jan Godschalks van Elten (d. 1700), who came from München-Gladbach, Jülich, and obtained citizenship in 1655. In 1665 the council of the Reformed Church protested that the Mennonites had a fixed place of meeting; thereupon they were forced again to meet in the homes of the members. In 1706 they bought a house which they remodeled as a church. In 1728 they found another place in the Remonstrant church on the Arminiaansche Plaats, which was now sold to the Mennonites.

During World War II the church was destroyed in September 1944; a new church was dedicated on 25 May 1952. In the 1950s there was a Sunday school for children and a ladies' circle. The city by the mid-1950s was predominantly (79 per cent) Catholic.

In 1710 a number of Mennonites from Switzerland, who were to be deported to the English colonies in America, were set free by the Dutch authorities on 9 April, when their ship, sailing down the Rhine, passed Nijmegen. They were cordially received by the Mennonites of Nijmegen