The Bible conferences focused on doctrinal teaching based on detailed scriptural exegesis. These three- or four-day conferences for lay people had the positive benefit of extending biblical knowledge among the laity, but also provided a forum for introducing theological influences from other bodies, since the teachers in these conferences were reading literature produced by theologians outside the Mennonite community. Thus the conferences helped to introduce fundamentalism to the Mennonite Church.

The first Bible Conference within the Mennonite Church of Canada (the name of the Mennonite Conference of Ontario until 1909) took place in 1899 and addressed a wide range of topics, including: Non-resistance, Holy Spirit, Special Talk on Dress, Swearing of Oaths, Going to Law, Church Government, Prayer-Head Covering, and Home Missions.

In 1906 the Mennonite Church of Canada decided to establish a “course of Bible study” to be held immediately after a Bible conference at the Berlin Church in January 1907. Samuel F. Coffman, who had studied at Moody Bible Institute, and Lewis J. Burkholder were the instructors for the first four-week course held from January 14 through February 8, 1907. They each taught two courses. A total of 65 students attended either the daytime or evening classes.

No Bible study class was held in 1908 because Coffman was under discipline within the conference for at least part of a year. Several years earlier Coffman had baptized two young women even though they had not committed themselves to wear a uniform bonnet in public, and they had continued to wear hats in public. 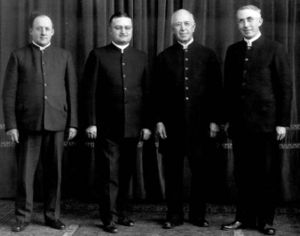 Despite this blip, by January 1909 the Bible study class was again on track, although it was cut short by a week because of a smallpox outbreak in the Berlin area. Coffman taught classes on “Methods of Study” and “Church History.” Burkholder taught “Doctrines of Salvation” and “Studies in Matthew.” Later that year the Mennonite Conference of Ontario established a three-person board to oversee the Bible class. Absalom B. Snyder, minister of the Wanner congregation served as chair; Isaiah Wismer, minister of the Strasburg (Pioneer Park) congregation was secretary, and U. K. Weber , minister at the Berlin Mennonite Church, served as treasurer. Board members were elected for three year terms. Over time the board expanded to nine members.

From 1910 to 1918 S. F. Coffman was the only teacher of the Bible class, except for 1916 when J. D. Brunk taught a music course. In 1912 a six-year rotation of courses was established, and in 1913 the course was expanded to six weeks in length. That same year Bible class students built a model of the Old Testament tabernacle, a teaching tool that was used for many years. Meals and lodging arrangements for students were also established during this time. For unknown reasons, classes for most of this decade were not held at the Berlin Church, but rather were held in various rented quarters in town. Finally in 1920, the school returned permanently to First Mennonite Church (renamed in in 1917 when the city of Berlin changed its name to Kitchener).

In 1919 Oscar Burkholder (Breslau Mennonite Church) assisted Coffman, and in 1921 became the second faculty member, working along with Coffman, who continued to serve as the principal of the school until 1947. He served as the second principal, from 1948-1954. Clayton F. Derstine (First Mennonite Church) served on the faculty from 1929-1949. He was a widely known evangelist, author and editor in the binational Mennonite Church who had come in 1925 to First Mennonite Church after the division that had seen the formation of the Stirling Avenue Mennonite Church. Derstine was a flamboyant preacher who sometimes came into conflict with conservative co-workers because he became more relaxed over some issues of church discipline related to dress regulations.

Jesse B. Martin was the fourth pillar who taught at OMBS from 1932 to 1966. He served as principal from 1957-1966. Although he had grown up in an Old Order Mennonite home, he was able to attend Hesston College and briefly at Goshen College. He was deeply involved in peace issues in the Mennonite Church, and had a prominent role in representing Ontario Mennonites during World War II. 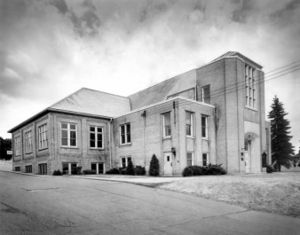 In the late 1920s the term was expanded to eight, then ten weeks in length. In 1930 the schedule was altered to follow a three-year curriculum rotation with twelve week terms.

The peak of enrolment occurred during the late 1920s and 1930s, ranging between 107 and 244 students in attendance. This was partially in response to an addition built by the Mennonite Conference of Ontario at First Mennonite Church specifically to accommodate the Bible school. By the 1950s the enrolment in Ontario Mennonite Bible School dropped below 100, and in the 1960s below 50. Most assimilated Mennonite young people were now graduating from high school and many were considering college, so the Bible school model lost much of its constituency. A higher percentage of students were attending from outside Ontario (most often Alberta and Pennsylvania), reducing the incentive for the Mennonite Conference of Ontario to continue support, even as it was undertaking financial support for Conrad Grebel College, a new Mennonite post-secondary venture in Ontario.

In the fall of 1951 an Ontario Mennonite Bible Institute for more advanced Bible study began with two 10-week semesters. The faculty and administration was shared between OMBS and OMBI, but the target audience was persons who would become congregational leaders, including pastors. It included courses on homiletics and pastoral theology, and Christian education courses aimed more at female students. Newer faculty members had more education, including college and seminary degrees. Eventually the Institute offered up to one year of credit accepted at some Mennonite colleges in the United States. Enrolment ranged from the 40s to the 50s during the life of the Institute, though in later years Ontario students were a small minority.

Both OMBS and OMBI closed in 1969 because of declining enrollment. During its six decades of operation OMBS was one of the oldest and most influential Bible schools in the Mennonite Church. Certainly OMBS provided an educational opportunity for many young adults in the Mennonite Conference of Ontario in an era when a low percentage attended high school.

Burkholder, L. J. A brief history of the Mennonites in Ontario : giving a description of conditions in early Ontario, the coming of the Mennonites into Canada, settlements, congregations, conferences, other activities and nearly 400 ordinations. [Ontario]: Mennonite Conference of Ontario, 1935): 165-166

Ontario Mennonite Bible School and Institute (Mennonite Church), located in Kitchener, Ontario, was an outgrowth of the Bible conference movement. The first extended Bible study class was conducted in 1907 for one week by Samuel Frederick Coffman and Lewis Josephus Burkholder, with an attendance of 50-60. The Ontario Conference in 1909 appointed the Bible Study Board to have charge of these classes. The Bible Study Class (later called Bible School) met annually with the exception of one year, with sessions at first of one or two weeks and later of four weeks or more. In 1918 a course of study was arranged covering the entire Bible, and training in Sunday school and Christian work extending over a period of six years and requiring an annual session of six weeks. Attendance and interest in the work were increased by this more regular form of study In 1929 the course was rearranged to increase the class periods to twelve weeks and shorten the cycle of study to three years. Every year since that time a number of students have finished this course. In 1929 an annex was built to the Kitchener Mennonite Church for the Bible school. Previously the classes had been conducted in the church or in rented quarters in the city. The school is still conducted in the further remodeled First Mennonite Church of Kitchener.

Before 1951 an advanced course was offered to Bible school graduates and others which led the Bible School Board to recommend to Conference the launching of the Ontario Mennonite Bible Institute. It was the conviction of church leaders that there was a need for a Bible course shorter than the regular college Bible course, but more thorough than the Bible school could offer in three months, to meet the need of mature young people who could not attend college. The first session of the Institute was held in 1951-52 for five months, two months before Christmas and three months following.

The teachers who have served or are serving are S. F. Coffman, Oscar Burkholder, Clayton Freed Derstine, Jesse Bauman Martin, Merle Shantz, J. F. Garber, R. S. Koch, Mrs. Arlin Snyder, Osiah Horst, H. S. Bauman, Paul Martin, Arnold Cressman, and Newton Gingrich. Principals in succession were S. F. Coffman for 40 years (1907-1947)k, Oscar Burkholder for 7 years (1948-55, Roy S. Koch, 1955-57, and J. B. Martin 1957- . The Ontario Bible School and Institute was well known in Western Ontario and the border states. Its activities, such as tract distribution, singing, and church programs, have been well received for years. The highest enrollment was 226 (1939). The 1957 enrollment of the Ontario Mennonite Bible School (OMBS) was 68; that of the Ontario Mennonite Bible Institute (OMBI) 38, making a total of 106.