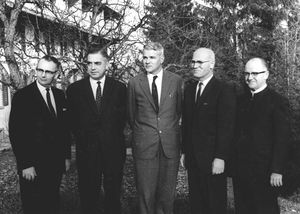 Johannes (Hans) A. Oosterbaan: theologian, seminary professor, pastor and ecumenical Dutch Mennonite leader, was born in Hilversum, Netherlands on 15 May 1910 to Pieter Oosterbaan (17 October 1873-12 April 1941) and Juliana Leverland (24 January 1871-9 April 1945). Pieter was a Mennonite minister in Harlingen, and descended from an old Frisian Mennonite family. In 1946 Johannes married Rensina Carolina Lugt (1910-2000). Johannes A. Oosterbaan died on 20 September 1998 in Haarlem.

During the 23 years that Oosterbaan served in these roles, he not only taught content but also grappled with the tensions between philosophy and theology and the prevailing ideas in his own Mennonite brotherhood: at the university, the views of Hegel and Kierkegaard; at the seminary, Karl Barth and Menno Simons. He considered defunct the old liberalism with its inroads in the Mennonite Church. He regarded himself as a "Mennonite Barthian" and led the seminary into a more evangelical and Mennonite theology.

While Oosterbaan felt called to assist the struggling congregations rather than to write books, he did produce several essays of a theological nature. Especially well known are his interpretations of Menno Simons, particularly his speech on the anniversary of Menno's death in 1961, which appeared in print in both Dutch and English. The Festschrift in his honor, De Geest in het geding (1978) indicates something of the unifying theme of his theology: an attempt to hold the Word and the Spirit in equal position and esteem. This emphasis on the Spirit helped Oosterbaan to communicate with and relate to the spiritualistic tradition of the Doopsgezinden.

Oosterbaan's relation to the World Council of Churches (WCC) was of ongoing significance, as was his perspective on the role of the Radical Reformation churches in the ecumenical movement. Since his own denomination was a member of the WCC he had an open door to represent the common heritage of these churches. He was especially active following the meeting of WCC’s Faith and Order Commission at in 1963 to gather support for his position. His experience as a lawyer helped him to gain entrance and respect in WCC circles. In all of his WCC activities, Oosterbaan called upon the Radical Reformation churches not only to participate but also to be aware of their common heritage and to understand better the theological implication of their corporate witness.

Oosterbaan, for many years an honorary editor of the Mennonite Quarterly Review, was an outstanding leader in the Dutch Mennonite community and in the world-wide Mennonite community. While he taught in the world of modem philosophy and theology, he intimately explored an understanding of Anabaptist/Mennonite thought and the work of the church in the late 20th century. Many will recall his North American visits to Mennonite communities with his wife, Renske: his interest in Mennonite colleges and seminaries; his concern about missions; and his presence at Mennonite World Conferences to which he was a delegate and served a term on the executive committee. In all of his wide-ranging activities Oosterbaan brought a spirit of optimism and love which communicated much encouragement and hope.

Books by and about J. A. Oosterbaan