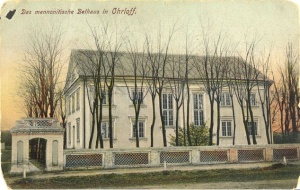 After the departure of the large Lichtenau group in 1824 the Orloff congregation was for a long time spiritually and culturally the most advanced congregation of the Molotschna as well as the most tolerant. It favored higher education, and the first Zentralschule, known as the Vereinsschule, was established at Orloff. Johann Cornies, the noted Mennonite administrator and cultural leader, was all his life a member of this congregation. During the 1860s, when the Mennonite Brethren Church came into being, Orloff with its elder Johann Harder was the first congregation to recognize it and to enter into friendly relations with it. Three elders of the Orloff church, Bernhard Fast (1821-1861), Johann Harder (1861-1876), and Abram Goerz (1876-1911), were all outstanding and strong personalities.

The greater part of the population of the following villages belonged to the Orloff church: Orloff, Tiege, Blumenort, Rosenort, Neukirch, Friedensruh, Tiegerweide, and some members from other villages. It was therefore a rural congregation consisting of farmers, numbering about 1200-1500, including children. The language of worship was German; for singing, the Gesangbuch zum Gebrauch in den Mennonitengemeinden Russlands was used. As in almost all Mennonite churches in Russia no instrument was used to accompany the singing, but choir singing was introduced at a comparatively early date. Church discipline was applied for moral misconduct. The Orloff church was built in 1809, the first in the Molotschna settlement, with the money donated by Tsar Alexander I. It was later considerably enlarged. The Neukirch church was erected in 1877.

The last elder, Jakob B. Wiens of Tiegerweide, immigrated to Canada in 1924. In 1926 P. D. Nickel was elected and ordained elder jointly of the Lichtenau and Orloff congregations. He served until 1930, when increasing religious persecution compelled him to leave Orloff. Worship continued until 1932, when the church was closed by the authorities. Even after that meetings were held for some time in private homes, until the last minister, W. H. Janzen, was arrested and banished. The building was then used as a Communist children's home.