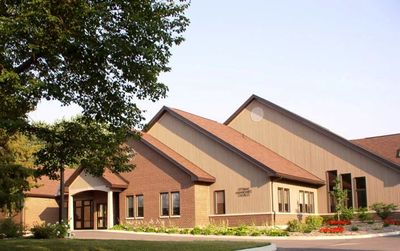 The Ottawa Mennonite Church began in 1959, though Mennonites had been living in Canada's capital for work in government offices up to two decades earlier. Peter and Helen Wiens, who came to Ottawa in 1938, were key Mennonite contact persons in those first decades.

The Conference of United Mennonite Churches in Ontario was aware of a core group of Mennonite families in Ottawa, and encouraged them to formally organize. In October 1959 Eldon and Hilde Krause invited a group of Mennonite friends to a dedication of their home. Rev. Henry H. Epp of Waterloo attended the dedication, and led a discernment process in which a group agreed to meet every second Sunday afternoon in various homes. The conference would arrange for a speaker and a singing group at least once a month.

In 1960 the group bought a two-acre plot of land, and formally organized as a congregation on 5 May 1963, although the first building was not erected until 1965. In the meantime, when homes became too small, they began to meet in the Pleasant Park public school. During its early years the congregation was known as the Ottawa Mennonite Fellowship.

William W. Dick served as the first (half-time) pastor while pursuing graduate studies. A year after Dick left, Frank H. Epp was also a half-time pastor while he also worked for Mennonite Central Committee's Peace Section. A feature of his years was an office in the church basement used for counselling USA draft dodgers from the Vietnam War.

Most of Ottawa Mennonite Church's early members were descended from Mennonites who immigrated to Canada from the Soviet Union in the 1920s. In later years there was increasing diversity within the congregation -- both from other Mennonite immigration heritages and other denominational traditions. The congregation has been transitory in nature; most of its members came from elsewhere to Ottawa for work or education. Changes in work assignment or retirement then often meant leaving Ottawa.

Because of its interests and location, Ottawa Mennonite Church has sponsored refugees coming to Canada regularly since 1979. It also has sponsored an annual Ten Thousand Villages sale since the 1970s.

The congregation's relationship to the larger Mennonite world has been ambivalent. Although its young people have attended Mennonite camps and post-secondary schools, many members have seemed grateful to be at a distance from the major Mennonite centers.

Ottawa Mennonite Church is the largest Mennonite church in the nation's capital, though a variety of other denominations and language groups have small congregations in the city.

On the home page of its website in 2017, the church featured worship, community and peace & justice. The section that included the congregation's covenant statement began: "We believe that the Church of Jesus Christ is identified more accurately by the life of its people than by any creed or statement of faith. The church must be observed in action to discover what its real purpose is and where it is heading."

Conference of Mennonites in Canada (1967-present)