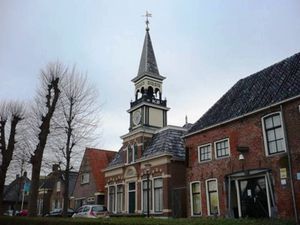 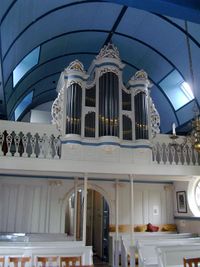 Oudebildtzijl, a village in the Dutch province of Friesland, about ten miles (16 km) northwest of Leeuwarden. In 1505 a large piece of land was reclaimed from the sea by dykes and was known as the Bildtland, which was drained into the ocean by means of a sluice (zijl), near which the village Oudebildtzijl later arose. Many of the peasants who settled in this Bildt-polder are thought to have organized very soon into a Mennonite congregation, the center of which was probably in Sint Anna-Parochie (at that time usually called Annakerk). The Mennonites living in and near Oudebildtzijl belonged to this congregation. A list set up on the occasion of the organization of the Mennonite Conference of Friesland (Friesche Doopsgezinde Sociëteit) in 1695 does not name Oudebildtzijl, which indicates that the members were still part of the Annakerk congregation; this is also the case in 1735, but at that date this congregation is called St-Annakerk and Bildtzijl. Blaupot ten Cate (Friesland: 192) writes that in 1695 the St-Annakerk and Oudebildtzijl congregations had already merged and had a total of 118 members, but it is more likely that they had not yet been separated.

The congregation had two meetinghouses, one in St-Anna-Parochie and one in Oudebildtzijl. The Oudebildtzijl meetinghouse dated from 1636 or even before. Church records have been preserved since 1642. By 1806 the St-Annakerk congregation had completely disintegrated and the church had been dismantled. In the same year Oudebildtzijl built a new church at Dominee Schuilingstraat 6 and became an independent congregation, then numbering 9 baptized members (34 in 1838). The church building was enlarged in 1860 and again in 1908, and a parsonage was bought, which was renovated in 1891. An organ was installed in 1896. The Oudebildtzijl church is the only Mennonite church in the Netherlands that has a bell in its tower, which serves as the village clock. When the bell was rung on the occasion of the birth of Princess Juliana on 30 April 1909, it cracked; for its repair a contribution was made by Queen Wilhelmina. The new bell was taken by the Germans in 1944. The congregation, which in the 1950s still consisted largely of farmers, numbered 140 baptized members in 1957 (88 in 1861, 98 in 1900).

In 1997 the church was closed and it became a visitor center for cultural and natural history.