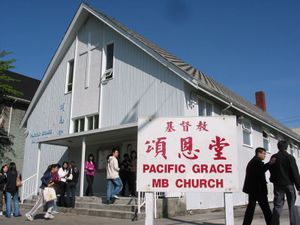 Beginning in 1950, Henry G. Classen, sent by the British Columbia Conference of Mennonite Brethren Churches, began street meetings in Vancouver. This work resulted in the establishment of the Pacific Grace Mission. The first fellowship was established on 11 December 1963 at 1587 Frances Street. In March 1964 the first Sunday worship was held in both the English and German languages, then known as the Pacific Grace Mission Chapel. From that time on the number of participating Chinese continued to grow and the church extended its evangelistic efforts to the Chinese community. In the fall of 1972, the number of Chinese participants reached 22. In early 1973, the Chinese congregation requested to conduct separate meetings because of the increasing size. In 1974, a Chinese department was established, with meetings conducted in Cantonese.

The first few years were full of trials for the Chinese ministry. Henry G. Classen had invited Li Him-Wor (Paul Li) from Hong Kong to lead the Chinese department, but Li passed away suddenly in 1975. The second Chinese pastor, Chu Yu-Man (Eddie Chu), soon left for further studies, and the Cantonese church was without a pastor for two years. For a time, Chan Chung-Ton (Stephen Chan) helped lead Bible study classes and preached during the Sunday worship services.

In spite of these trials, the Cantonese ministry continued to grow. In early 1977, the English congregation decided to dissolve their congregation. In April of the same year Pacific Grace Mission Chapel officially became Pacific Grace Chinese Church, designed to minister to ethnic Chinese in the Cantonese language. Some English-speaking Christians stayed behind until 1983 to help the church develop and to teach in the children’s Sunday school.

In 1980, Wong Cheung-Ho (Enoch Wong) arrived to pastor the church, and the church thrived. The congregation joined the British Columbia Conference of Mennonite Brethren Churches in 1981, and the membership grew from 20–30 to 105 in 1983. Three members of the church entered Bible college, including Zhuang Jian (Miller Zhuang), who joined the pastoral staff in 1987.

Enoch Wong retired in 1987 for health reasons and was succeeded by David Chan. Due to the Tiananmen Square massacre in 1989 and worries over the imminent takeover of Hong Kong by China in 1997, a large influx of immigrants from Hong Kong began entering Canada in the late 1980s, and Pacific Grace seized the opportunity to reach out to these immigrants. Membership jumped from 155 in 1987 to 240 in 1989. The deacons tried frantically to find a bigger meeting place, but no appropriate site was found. To temporarily alleviate the overcrowding problem, the church moved to two Sunday worship services. Keynes Kan joined the staff in 1988, and Valerie Yiu in 1989, with Yiu beginning an English worship service for English-speaking Chinese youth. The church worked hard at outreach and sent associate pastor Miller Zhuang to Caracas and Puerto la Cruz in Venezuela and helped establish two Chinese churches there.

As the membership continued to grow and space became more of a pressing concern, the leaders had a vision for developing new congregations. During the 1990s, the church proceeded to plant three congregations in the Vancouver area. In 1990, a branch congregation, Burnaby Pacific Grace Chinese Church, was established, becoming independent in 1991. In March 1995, another site for evangelism was established in south Vancouver. A one-church two-site model continued until the end of 1997. In 1998 the south site became the South Vancouver Pacific Grace Church, and the mother site was also renamed as Pacific Grace Mennonite Brethren Church. The North Shore Pacific Grace MB Church was planted in North Vancouver in 1997.  As the number of new immigrants from Hong Kong declined in the late 1990s, Pacific Grace changed direction. In 1999, simultaneous translation for Mandarin-speaking Chinese was added to the worship services to meet the needs of the increasing number of immigrants to Vancouver from mainland China.