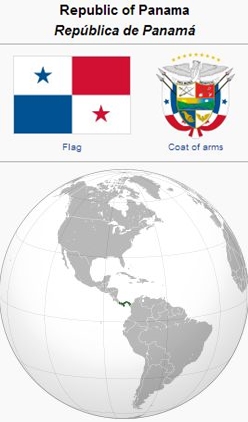 The Republic of Panama is the southernmost country of Central America. Situated on the isthmus connecting North and South America, it is bordered by Costa Rica to the northwest, Colombia to the southeast, the Caribbean Sea to the north and the Pacific Ocean to the south. The total area of Panama is 75,517 km2 (29,157 square miles). The capital is Panama City.

Panama had a population of 3,360,474 in 2009. As of the year 2000, the majority of the population, 50.1%, was Mestizo (people of mixed European and Amerindian heritage or descent). African and Mulattos were together the largest minority, accounting for 22%. For the remaining groups the percentages were: Ameridian 6.7%, European 8.6%, Asian 5.5%, and other 7.1%. The Amerindian population includes seven indigenous peoples: the Emberá, Wounaan, Guaymí, Ngöbe Buglé, Kuna, Naso and Bribri.

Various sources estimate that 75 to 85 percent of the population identifies itself as Roman Catholic and 15 to 25 percent as evangelical Christian.

The Mennonite presence in Panama is represented by the Iglesia Evangélica Unida (Evangelical United Church), which was founded among the Choco people in Darien Province of southern Panama in 1961. The congregations of this conference originated through a literacy and adult education program aided by the Mennonite Brethren Board of Missions and Services. This was an outgrowth of Mennonite Brethren mission work in Colombia. The conference was mainly indigenous from the beginning and was fully autonomous. It was officially incorporated in 1971 with a board of directors.

Leaders of the conference were trained through an extension Bible school, and some of the leaders had training in health services and teaching education from national schools. The conference took an active part not only in evangelizing, but also in health care and training in hygienic practices and in basic education, which was partially supported by the national government. The conference was confronted with some resistance to the implementation of modern health practices and education and worked to help the people with their economic and social problems while also insuring that their cultural identity was maintained. Loss of church membership through scattering of people seeking economic improvement was also a problem. In 1984 the conference had 400 members worshiping in 15 centers. -- Reynold Sawatzky