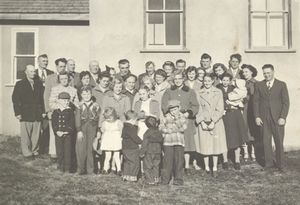 Congregation of the Pella Mennonite Church, about 1954
Source: Jim Lyding. 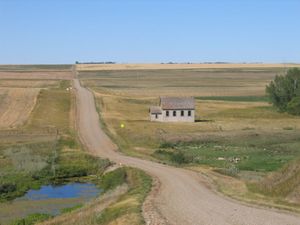 Pella Mennonite Church building as it appeared in 20 August 2006, looking north, with the cemetery the small darker patch just to the north of the building.
Source: Victor G. Wiebe.

The Pella Mennonite Church in Neville, Saskatchewan, Canada was a branch of the multi-congregation Emmaus Mennonite Church. In the early 1900s a number of Mennonite families from Manitoba, mostly Sommerfeld Mennonites but including some Manitoba Bergthal Mennonites, moved into the area south east of Swift Current, Saskatchewan. Some took up homesteads but others like the four Voth brothers, Henry, Bill (William), Peter and John, established a General Store in the village of Neville.

In 1913 the Conference of Mennonites of Canada began sending visiting pastors, including Benjamin Ewert, to the area. Formal worship services began in 1914 with worshipers meeting in homes. A German school was established that met in a tent in summer and a home in winter. By 1916 a small building was constructed in Neville on land donated by Isaac Heinrichs and the name Pella was chosen. The name, Pella, is derived from the town where in 66 A.D. the Christians of Jerusalem fled pending the Jewish revolt against the Romans and thus were saved from destruction. In 1924 Peter Vogt as Trustee and Benjamin Ewert as pastor formally petitioned the Canadian Federal Government to sever the two acres (0.80 ha.) of land where the church building sat from the rest of the quarter section. This was granted on 21 October 1925.

In the 1920s the rural community of Neville experienced an influx of Mennonites fleeing the Soviet Union. German was the language of worship and the congregation always remained small and often had Mennonites from a variety of different affiliations. At times it suffered by not having a permanent leader or resident pastor. Furthermore, visiting pastors from the other Emmaus congregations or the Conference was intermittent. By the 1940s the repeated crop failures of the Great Depression, along with improved roads and better employment opportunities elsewhere, caused many to leave for Ontario and British Columbia. The congregation closed its doors in 1958 and the two or three remaining families joined either local non-Mennonite churches or the Emmaus Mennonite Church in Blumenhof.

The congregation is noteworthy for having three lawyers come out of one extended Vogt – Buhr family, Henry Vogt, his brother David Vogt, and Abram Buhr who was related by marriage. Though part of the Mennonite community, these lawyers, who were among the first lawyers of Mennonite background in western Canada, were never formally church members. Henry also served as Neville’s first mayor and his son Alfred, under the name A. E. van Vogt, became in mid-century a famous science fiction writer.