From GAMEO
Revision as of 02:09, 4 October 2018 by AlfRedekopp (talk | contribs)
(diff) ← Older revision | Latest revision (diff) | Newer revision → (diff)
Jump to navigation Jump to search
A checked version of this page, approved on 4 October 2018, was based on this revision. 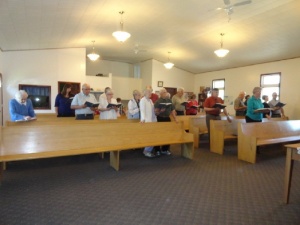 Pelly Fellowship Chapel, part of the Evangelical Mennonite Conference, was started in 1950 through the outreach efforts of the Western Gospel Mission. Ben Eidse was the first worker, serving from 1950 to 1953, first as an unmarried man and then with his wife Helen (nee Reimer), whom he married on 30 March 1952.

In the winter of 1954 to 1955 an 18.5x27.6 meter building was moved from Mikado, Saskatchewan, into Pelly as a chapel.  In 1972 it was replaced by the building formerly used by the Valley Stream church (an Evangelical Mennonite Conference congregation that dissolved in 1971), which was moved into Pelly in 1972 and placed on a new lot just south of the old site. A manse was built in 1964.  When the Western Gospel Mission was dissolved in 1961, Pelly Fellowship Chapel was transferred to the Evangelical Mennonite Conference that year, though it was formally organized only in 1963. The congregation was later enlarged and enriched by people connected with two groups in Arabella area: a Western Gospel Mission work in Arabella that dissolved and the Swan Plain Mennonite Church that later merged with Pelly Fellowship Chapel during Ernest Funk’s period of service.