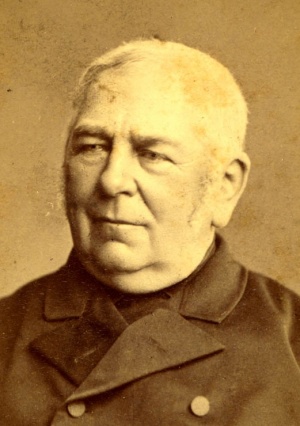 Gerhard Penner: elder of the Heubuden Mennonite Church, West Prussia; born 20 May 1805 in Marienburg, West Prussia, the son of Heinrich Penner and Anna (Fast) Penner.  He was baptized 19 May 1823 in the Heubuden Church.  He married Agathe Goossen (7 February 1812 – 24 August 1875, Koczelitzky, Gross Werder, Prussia) on 16 February 1830.  She was the daughter of Johann Goossen and Catharina (Hamm) Goossen. Gerhard and Agathe had three children that lived to adulthood: Heinrich, Gerhard, and Johannes.  Gerhard died 20 February 1878 in Nebraska, USA.

Gerhard was the leader of the conservative Mennonites who opposed the acceptance of the constitution adopted by the North German Confederation on 18 October 1867, which stipulated that the Mennonites accept noncombatant services. Twenty-three representatives of the West Prussian congregations met in his house at Warnau (Koczelitzky) and a delegation of five was sent to Berlin to interview Alfred von Roon, the Prussian Minister of War. Nevertheless the law pertaining to military service was published, and the delegation was summoned to Berlin once more. When Gerhard Penner, Johann Andreas, and others saw that they would be compelled to accept noncombatant service, Penner migrated to Beatrice, Nebraska in 1877, with a minority of the large Heubuden congregation. He died there in February 1878.