The first four volumes of the printed Mennonite encyclopedia contain articles on specific types of periodicals, e.g. "Almanacs," and specific periodicals, e.g. "Christlicher Bundesbote," but no general article on "Periodicals." These four volumes included approximately 200 entries on periodicals. Mennonite bibliography, 1631-1961 (published in 1977), lists slightly more than 830 periodicals. This does not include publications of very limited audience. A complete count of Mennonite periodicals in 1988 would probably total more than 3,000, some ephemeral, others passing the century mark in duration of publication.

The earliest known Mennonite periodical is Naamlijst der Tegewoordige in Dienst Zijnde Predikanten der Mennoniten in de Vereenigde Nederlanden, published irregularly under variant titles, 1731-1829. The title with longest continuous publication seems to be the annual Kalender für der Versammlungen der Mennoniten-Gemeinden in Ontario (1836-). Still published by the Old Order Mennonites of Ontario, it was launched by the Mennonites in Ontario to provide the schedule and location of worship services. 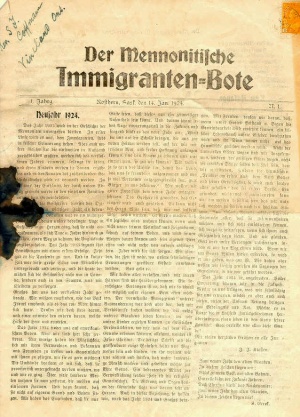 The earliest known European journal published more frequently than annually is De Philosooph (weekly), 1766-69. In North America it is Religiöser Botschafter, 1852-55, superseded by Das Christliche Volksblatt, 1856-88; (title later changed to Der Mennonitische Friedensbote. The journal with longest continuous publication in Europe is the Swiss Zionspilger (name changed to Perspective in 1990), 1882- ; in North America, Der Mennonitische Rundschau, 1880-, which superseded Der Nebraska Ansiedler, 1878-80. The Dutch Mennonite De Zondagsbode, 1887-1942, North German Mennonitische Blätter, 1854-1941, and South German Gemeindeblatt der Mennoniten, 1870-1941, were casualties of World War II. Dutch Mennonites have published Algemeen Doopsgezind Weekblad, since 1946. Both German periodicals resumed publication, but were replaced by Brücke in 1985. In North America the Evangelical visitor (BIC, 1887-), and The Mennonite (GCM, 1885-1998) passed the century mark. The Gospel herald (MC, 1908-1998), was preceded by the privately published Herald of truth (1864-1908), Herold der Wahrheit (1864-1901), and Gospel Witness (1905-08). The Gospel Herald and The Mennonite were superseded by a new U.S.-based The Mennonite in 1998 in anticipation of the merger of the Mennonite Church (MC) and General Conference Mennonite Church. The parallel in Canada was Canadian Mennonite (1997-). The General Conference German-language paper has been Der Bote (1925-). The English-language Mennonite Brethren journals in Canada have been Mennonite Observer (1955-1961) and Mennonite Brethren Herald (1962-). The official organs of other Mennonite groups will be found under their own titles or under the relevant denominational historical sketches,

The 20th century has seen an ever-increasing expansion in the number of Mennonite journals, differing widely in content, intended audience, level of scholarship, frequency of publication, and length of life. The shift from letterpress and other more cumbersome methods of printing to printing from photomechanical plates and masters has stimulated professional and amateur printing alike. This has been accompanied by a tendency in major Mennonite organs, both in Europe and North America, to a more journalistic style, briefer articles, more informal institutional news, more illustrations, and less personalia, except for formalized birth, marriage, and death notices. For younger Mennonite churches outside Europe and North America for and by whom there had been very little literature produced, the newer methods of printing have facilitated production of journals. The older major denominational and a few inter-Mennonite journals, including scholarly journals, now compete with a burgeoning flood of periodical literature from departments and committees of an increasing number of church institutions, minority and special interest groups, local congregations, regional historical societies and family genealogists. Unfortunately, the obscurity and complex nature of this body of literature so important to researchers is such that there is little hope of exhaustive listing or preservation except or even through combined efforts of Mennonite historical libraries.