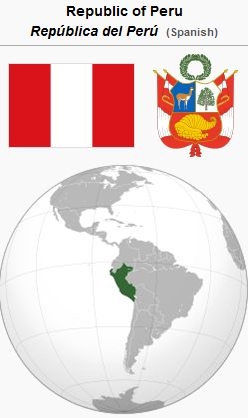 The Republic of Peru is located in western South America, bordered on the north by Ecuador and Colombia, on the east by Brazil, on the southeast by Bolivia, on the south by Chile, and on the west by the Pacific Ocean. It has an area of 1,285,216 km2 (496,225 square miles).

Mennonite Brethren missionaries worked in the areas of Bible teaching, literature, agriculture, community development, and public health. They lived in Pucallpa, Mazamari, and Satipo. About 25-30 village congregations resulted from this ministry among the Campa Ashaninca people. In 1986 the independent Association of Ashaninca Evangelical Churches was organized.

In 1983, Mennonite Brethren Missions and Services responded to a flood disaster in northern Peru by sending food, medicines, and mission workers. This led to the formation of several Bible study groups and in 1986, the Mennonite Brethren Church of Peru was officially recognized by the government of Peru (Iglesia Evangélica de los Hermanos Menonitas del Perú). Two congregations with total membership of about 60 were organized in Sullana and Vichayal. More missionaries were preparing to join this work. In 2003 there were twelve congregations with 215 members.

In 1985 Eastern Mennonite Board of Missions and Charities (Mennonite Church) sent an investigative team to Peru. As a result of their visit and support from new churches of the Lancaster Mennonite Conference (MC), a missionary couple was sent to Peru in January 1987 to study the Quechua language in Lima in anticipation of a church planting effort among the Quechua people. -- Harold Ens

In 2012 the following Anabaptist denominations were active in Peru: