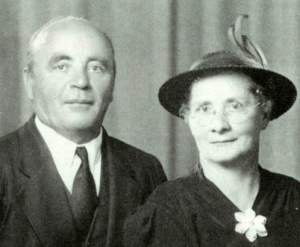 Cornelius C. Peters: teacher, preacher, evangelist; born 17 March 1889 in Sergeyevka, Fürstenland, South Russia to Cornelius Heinrich Peters (28 February 1862–September 1893) and Anna (Lemke) Peters (11 October 1863–31 July 1953). He was the third of five children. On 7 June 1909 he married Katharina (b. 1889), the daughter of Daniel Hildebrand (1853–1931) of the Ekaterinoslav area in Russia. Cornelius and Katharina had one daughter and four sons, including Justina, Daniel Charles, Cornelius C., Peter George and Frank Cornelius. Katharina died in 1920, soon after her youngest child Frank was born. On 1 November 1920 Cornelius married Anna Reimer (27 September 1880–9 August 1971), daughter of Nikolai P. Reimer and Maria (Pankratz) Reimer. Together they had one daughter, Anne. Cornelius died 11 June 1973 in St. Catharines, Ontario at the age of 84.

When Cornelius was three years old, his father died. Consequently Cornelius spent his early childhood with the Cornelius Epps, who took him into their home as a stepson. At the age of 12 he was baptized and received into the Mennonite Church.

Cornelius attended elementary school in home village. Later he attended the Chortitza Secondary School, and also studied at the teacher training college at this location. He began his teaching career at 19. The classroom was a natural environment for Peters, where he was inspired by the interaction with students.

Cornelius was ordained to the gospel ministry in the Mennonite Church and served for many years as an evangelist and itinerant preacher. He particularly enjoyed preaching from the book of Revelation, where he could indulge his creative eschatological imagination.

Peters and his family immigrated to Canada in 1925 and settled in Saskatchewan, first at Davidson and then in Herbert. Here he ministered in the Herbert Mennonite Church from 1925 until 1930, and taught for a year in the Herbert Bible School. He joined the Mennonite Brethren Church in Canada and was again ordained to the ministry. During the early 1930s the family moved to British Columbia, where they established a small dairy operation in Agassiz. However, farming was never in his blood. He much preferred to exchange the drudgery of farm work for teaching and preaching.

In September 1936 the South Abbotsford Mennonite Brethren Church started an evening Bible training program for which they asked Peters to be the teacher. When at the same time the Elim Bible School in Yarrow was beginning to thrive, Peters was invited to be the principal. During his time there in the 1940s, this school reached its peak enrollment of 151 students.

After years of teaching in a number of Canadian Bible schools, he and his wife ministered as a Bible teacher in the Mennonite colonies of Paraguay, Brazil and Uruguay for twelve years from 1947 until 1959. During this time they served in various educational capacities under Mennonite Central Committee and under the Board of General Welfare. Upon their return to Canada, Cornelius continued ministering in a variety of contexts. Following a ministry that spanned 50 years, the Peters retired to Tabor Manor in St. Catharines, Ontario in 1969.

Peters was blessed with a booming voice and a lively humor that never left him. When asked how he was coping with retirement in the Seniors' home, he wryly noted, "You can report that my children say I am enjoying this place." His efficiency and zest in the classroom were an inspiration to hundreds of students both in Canada and throughout South America. As a preacher he was much in demand for Bible conferences and Sunday sermons.