Pines Bible Camp is a summer camp and retreat center in Grand Forks, British Columbia. Pines Bible Camp began out of a church’s summer camping ministry to children. During the early 1960s, George Martens, pastor of the Gospel Chapel in Grand Forks, had a vision for getting children into God’s beautiful creation and introducing them to Jesus Christ. At the time a beautiful 163 acre parcel became available along the Granby River. George Martens, Jake Bekker, Ben Schmidt, George McIver, Dennis Jones, and Harry Harshenin co-signed a loan to purchase this ideal site. The Pines Bible Camp Association formed a society in 1963 and that summer began operating summer camps on the new property.

The purpose statement of Pines Bible Camp is to provide a fun, active, and educational outdoor program for kids, youth, and adults in the beautiful setting that God, our creator, provides. Campers are encouraged to love God and examine the Christian faith, in a non-threatening atmosphere. The desire is that each camper will build a personal relationship with Jesus Christ, and experience spiritual growth.

Until the early 1990s, Pines operated as a ministry of the Gospel Chapel Fellowship in Grand Forks, a Mennonite Brethren congregation after 1976. In the early 1990s the ownership of Pines Bible Camp was given to the British Columbia Conference of Mennonite Brethren Churches, with immediate oversight exercised by a local board. The process of transferring governance from the local church to the conference was completed in 2005.

Before Pines purchased the 163 acre property, it was a Doukobor village, called “God’s Valley.” Initially the facilities at the Pines were modest. Campers stayed in tents and a small kitchen and dining room was constructed in the 1960s. In the 1970s BC Hydro built a major power line through the West Kootenays, passing through the Pines property. The revenue generated from sale of the right-of-way paid for the outstanding mortgage and covered the cost of many projects at the time. Between 1970 and 1990 seasonal cabins were built and an extension added to the dining room and kitchen. A metal building was put up to be used as a gym, and when George Martens passed away in 1992, a concrete pad was poured for an outdoor basketball and volleyball court. In 1995 an outdoor chapel with a band-shell and amphitheatre was constructed. The facilities grew over those years to accommodate 80 campers per week during the summer months. 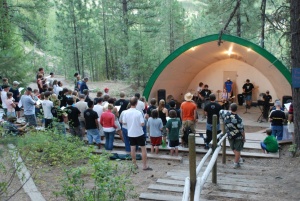 Until 1995, Pines was run solely with volunteers. Different directors managed each week or number of weeks, as they were available. In 1995 Gene Krahn became the first salaried director. Initially he was hired for four months of the year. Over the next decade the director’s position became full time. In 2010 Gene Krahn and his wife, Vicky were responsible for the summer camp programs, managing the facilities, and developing programs to include off-season use. In 1995 a total of 337 campers participated in a camp at Pines. By 2009 there were 1,336 campers. Campers come from all parts of the Kootenays, Boundary, Okanagan, and Fraser Valley to participate in Pines’ summer programs.

In 2010 Pines Bible Camp ran camps for ten weeks during the summer, which included week-long residential Summer Camps, Day Camps, a Family Camp Weekend, as well as two leadership development programs. Over the last 15 years, over 3,000 campers have made decisions to follow Jesus or recommit their lives to Christ.

In the off-season, Pines offered a popular School Program in which area schools facilitated their outdoor education needs. In 2009, all of May, June, September, and part of October were fully booked with guest groups.

In 2010 Gene and Vicky Krahn continued to serve at Pines. Gene was the Executive Director. Vicky was the Office Administrator, School Program Director, and Food Services Director. Other year-round staff included Blake and Raelene Chursinoff, who started as Program Director and Registrar in 2008, and Dan Trainer who started as Maintenance Director in 2007. Ten seasonal staff were hired to run the off-season programs and another fifty staff joined the team to facilitate the summer camps.