From GAMEO
Revision as of 20:05, 14 February 2018 by RichardThiessen (talk | contribs) (Made slight changes based on Les Friesen correspondence.)
(diff) ← Older revision | Latest revision (diff) | Newer revision → (diff)
Jump to navigation Jump to search
A checked version of this page, approved on 14 February 2018, was based on this revision. 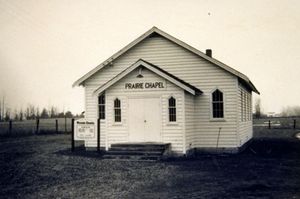 Prairie Chapel (also known in its early years as Sumas Prairie Chapel), located in the Sumas Prairie area of eastern Abbotsford, British Columbia, began in May 1951. Initially known as the Sumas Sunday School Mission, the work was inspired by Henry H. Neufeld, an instructor at Bethel Bible Institute. He believed that a work of this type would be a tremendous opportunity for Bible school students. Several individuals from the West Abbotsford Mennonite Church put this vision into action, and began holding Sunday school classes in the home of James Killoron. After a month, classes were moved to a small house in the area owned by Buckerfield's. Albert "Bert" and Mary Nickel each taught a class the first winter. In January 1952, Ruth Schellenberg replaced Mary Nickel and a third class was taught by John Bartel. Additional classes were added in 1953 and 1954.

In the fall of 1954 West Abbotsford Mennonite Church became more formally involved in the activities of the Sunday school mission by assuming direct control. Land was purchased to construct a new building, completed in time for the Christmas program that year. The official opening took place on 20 March 1955. A Sunday morning service was attempted that spring, but was discontinued after three trial Sundays.

By fall 1955 there were six Sunday school classes with a total of 53 registered students, and a clubs program was also started in that year. In summer 1956 a Daily Vacation Bible School (DVBS) was held, with 20 children in attendance. By 1959 attendance had DVBS had increased to 74.

Bert and Mary Nickel, who had led the work since 1951, resigned in 1956 and were eventually replaced by Dave and Phyllis Wiebe in 1958. In 1959 Sunday evening services and weekly prayer meetings were started at what was now known as Prairie Chapel. Les and Lydia Friesen replaced the Wiebes as leaders in 1960.

Teachers and drivers from the West Abbotsford congregation took turns picking up children for Sunday school in the early years until 1961, when a school bus was purchased. Volunteers from West Abbotsford as well as from Bethel Bible Institute continued to teach Sunday school and help out with church services.

In January 1964 a regular Sunday morning service was started and Sunday evening services were eventually discontinued. Bert and Mary Nickel returned in November 1967 and Bert took over as pastor.

On 21 February 1969 Prairie Chapel was incorporated as a society. A charter service was held on 1 February 1970 with 21 charter members. The congregation did not affiliate with any conference. A renovation in 1970 created a new sanctuary for about 150 people.

Martin Gouldthorpe began serving as pastor in January 1975, becoming full time in September 1978. He served until 1989.

In 1984 a DVBS was started in the Straiton area of Sumas Mountain. Eventually a Sunday school and worship service were held in Straiton Community Hall, leading to the formation of Sumas Mountain Christian Fellowship.

In 1985 there were 140 members. The language of worship is English.