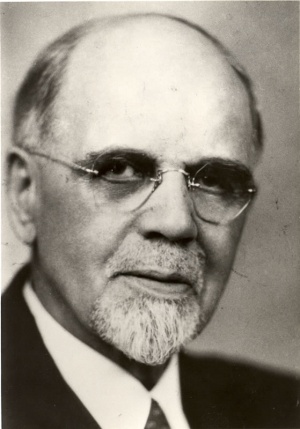 Joseph Eicher Ramseyer: one of the chief founders and for forty-four consecutive years president and spiritual father of the Missionary Church Association; born 7 February 1869, near New Hamburg, Waterloo County, Ontario, the son of Michael and Mary Ramseyer, members of the Amish Mennonite Church. Ramseyer was married 27 October 1896, to Katherine Zeller of Bluffton, Ohio, who died in 1899. His second wife was Mary Garth of Union City, Tennessee, whom he married 1 May 1902. He had no children. He died in Fort Wayne on 25 January 1944, and was buried in Lindenwood Cemetery there.

Joseph's father died when the boy was only four years old, and he was reared in his grandfather's home near New Hamburg. The family moved to Zurich, Hay County, Ontario, and from there in 1890 to Elkton, Michigan, in the Huron Peninsula. While living at Zurich Joseph had a conversion experience in 1885, influenced in part by reading the biography of George Müller of Bristol. Soon after his arrival in the Elkton community he felt the call to preach and began preaching in his home community, though he was not yet ordained. He was ordained in March 1892 by Bishop Joseph Rediger of Gridley, Illinois, and Joseph Egly of Berne, Indiana, both leaders in the Defenseless Mennonite Church (later known as the Evangelical Mennonite Church). He served as pastor of the Elkton church (meetinghouse erected in 1894) until his evangelistic work became too heavy. He had been baptized (by pouring) several years before as a member of the Defenseless Mennonite Church by Bishop Henry Egly, founder of that church.

Ramseyer began his very effective evangelistic work in January 1893 in the Defenseless Mennonite Church at Archbold, Ohio. On 11 August 1896, he had himself baptized by immersion while attending a Christian and Missionary Alliance conference at Cleveland, Ohio. On 8 December 1896, he was expelled from his church by action of its General Conference, meeting near Berne, Indiana. The grounds of the excommunication were his teaching of such doctrines as the second work of grace (baptism by the Holy Spirit subsequent to the new birth), pre-millennialism, and baptism by immersion. The struggle in the Defenseless church over these matters had lasted for 5 years (1891-96).

Ramseyer became the first superintendent of the Bethany Bible Training School founded on 1 November 1895, at Bluffton, Ohio, which continued until 1901, serving in that office 1895-97. However, the school of the Missionary Church Association was to be the Fort Wayne Bible Institute (now called the Fort Wayne Bible College) founded in January 1904, largely due to the efforts of Ramseyer, who served as president from 1923 until his death.

Ramseyer was a man of unusual ability as a preacher and evangelist and of undoubted spiritual power, universally beloved and respected. At his death his denomination had grown to 6,500 members, and his school to an enrollment of 300 students. "He was an honorary vice-president of the Christian and Missionary Alliance for many years and carried on a wide and influential ministry in other denominations" (Lugibihl and Gerig, 53).