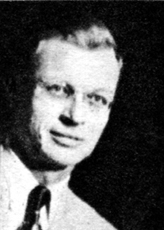 Erhart’s father Johannes was the leading minister and later elder in the Tiefengrund Mennonite Church in Laird, Saskatchewan. Erhart grew up in Laird and attended the German-English Academy in Rosthern. Regier became a teacher in the Embury and Osler School Districts and taught at Passchendaele School near Hague and at Penzance School in Holdfast, all in Saskatchewan. Besides teaching, Erhart was also an active member of the community. In 1940 he was the key individual in organizing the Osler Co-operative Association. He later moved to Hepburn where he was the manager of the Hepburn Co-op Store. In 1950 Erhart and family moved to Burnaby, British Columbia.

On 10 August 1953 Erhart, running as a Co-operative Commonwealth Federation candidate, was elected as the Member of Parliament for the federal riding of Burnaby-Coquitlam. Regier was the first Mennonite elected to the Canadian House of Commons. He was re-elected in 1957, 1958, and 1962 (the last year as a New Democratic Party candidate). While serving as a Member of Parliament, Regier served on a number of Parliamentary committees, including those of Public Accounts, Miscellaneous Private Bills, Banking and Commerce, Estimates, and External Affairs. Erhart was also attached to the Canadian delegation at the United Nations for five years.

Erhart resigned his seat on 20 August 1962 so that his party’s leader, Tommy Douglas, could contest a safe seat in a federal by-election after failing to win a seat in the 1962 federal election. Douglas went on to press the minority governments of Pearson to pass some of the most progressive social legislation in Canada's history. Regier stood as the NDP's candidate in Fraser Valley in the 1963 election, in Algoma West in the 1965 election and in Prince George—Peace River in the 1968 election, but was not re-elected to the House in any of the later elections.

Regier claimed that Mennonites had failed to keep pace with the times. The old tradition of non-involvement in political matters had been established at a time when the church and state conspired to suppress individual freedoms. Contemporary Canadians lived in a democratic society where personal freedoms were protected. Mennonites needed to recognize that fact, accept their responsibilities as citizens, and participate in the political process. While some believed that involvement in politics led to the compromising of one’s personal beliefs, it was noted that Regier was open in expressing his personal convictions regardless of what his own party or anyone else thought about them.