From GAMEO
Revision as of 01:58, 11 September 2014 by RichardThiessen (talk | contribs) (Created article.)
(diff) ← Older revision | Latest revision (diff) | Newer revision → (diff)
Jump to navigation Jump to search
A checked version of this page, approved on 11 September 2014, was based on this revision. 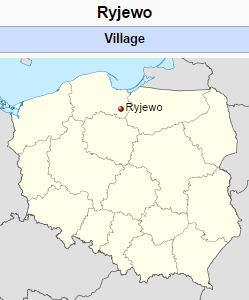 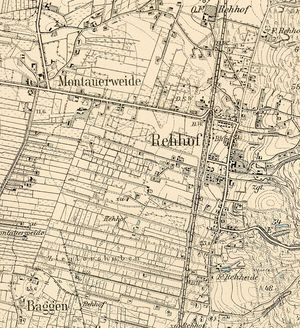 Rehhof was established by the 14th century. During the rule of the Teutonic Knights there was a monastic farm here, which burned in 1622. Rehhof was established under a long-term lease by Mennonites in 1742. The northern section of the village included the Oberförsterei Rehhof, a forestry administrative district.

Until 1772 Rehhof was located in what was known as Royal Prussia (also known as Polish Prussia) in the Kingdom of Poland. The First Partition of Poland in 1772 resulted in the creation of a new province on 31 January 1773, called West Prussia, in which the village was located. The village was situated in the district (Kreis) of Stuhm in Regierungsbezirk Marienwerder until the end of World War I, when it came under the jurisdiction of East Prussia. The village came under the control of Nazi Germany during World War II until March 1945, when it was occupied by Soviet forces and returned to Poland. In 2014 Ryjewo was a village in Kwidzyn County, Pomeranian Voivodeship, in northern Poland. It was the seat of the gmina (administrative district) called Gmina Ryjewo.

There were no Mennonite reported in Rehhof in the 1776 census, nor were they any reported in the 1824 census. However, in 1868 the village counted 39 houses, 309 inhabitants, 173 Catholics, 122 Evangelicals and 14 dissidents, most likely Mennonites. The 1935 membership list for the Mennonite church in Tragheimerweide lists the following Mennonite families: Albrecht (2), Bartel (2), Cornelsen, Ediger (2), Goerz, Goertzen, Penner (3), Quiring, Schliffki, Schepansky, Wiens, and Wiebe. Mennonites in Rehhof fled to the West at the end of World War II, thus bringing an end to the Mennonite presence in Rehhof.