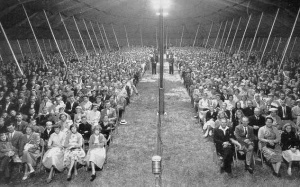 Revival Meetings (German, Erweckungsversammlungen), a name given in North America to a series of meetings, usually one or two weeks in length, although they may continue as long as six to eight weeks, held in Mennonite and other Protestant churches for the purpose of stimulating spiritual life and activity among professing Christians. The name is often confused with "evangelistic meetings," whose ostensible purpose is to win unbelievers to faith in Christ. Often the two purposes are combined and accordingly the names are used interchangeably. Usually an outside preacher is brought into a congregation who is expected to preach on the great central themes of the Gospel and to urge more complete consecration, or renewal of careless members, in addition to appealing for unbelievers to accept Christ as Savior. Sometimes a song leader or a musical team accompanies the preacher.

Revival meetings first entered the Mennonite churches in North America through outside influences, and usually against opposition. It is not clear whether Daniel Hoch of Vineland, Ontario (1806-78), who was ordained in the Mennonite Church (MC), then for a time (1850-60) joined the Oberholtzer group and finally the Mennonite Brethren in Christ, introduced revival meetings, and if so in which group, certainly not in his original congregation. The same is the case with William Gehman, founder of the Evangelical Mennonites in Pennsylvania, who was expelled by the Oberholtzer group in 1857. The first revival meetings in the Mennonite Church group were held in 1872 by Daniel Brenneman of Goshen, Indiana, assisted by John F. Funk at Masontown, Pennsylvania. In 1875 he was expelled by his church in Indiana, apparently for too vigorous promotion of new methods of church work including revivalism, and led the formation of a new Mennonite body, with Solomon Eby of Ontario, which ultimately became the Mennonite Brethren in Christ Church (Evangelical Missionary Church) and which used the revivalist method extensively and effectively.

John S. Coffman (1848-99) was the pioneer in the use of the revivalist method in the Mennonite Church (MC), beginning in 1879 when he moved to Elkhart, Indiana. By 1900 the method was widely accepted in the church, and by 1920 it had become practically a universal custom for each congregation and each church college to have at least one series of revival meetings annually.

The revivalist procedures borrowed from the outside were usually altered and adapted somewhat to suit the Mennonite genius and spirit.

In the 1950s two organized revival efforts appeared in the Mennonite Church (MC), which have conducted inter-Mennonite revival meetings in numerous larger Mennonite communities as well as in the Mennonite Church congregations. These were Brunk Revivals, Inc., founded in 1951 by George R. Brunk, Jr., and Christian Laymen's Tent Evangelism, Inc., founded in 1952 by Howard Hammer, later led by Myron Augsburger. Both organizations aimed to evangelize unbelievers as well as to revive church members, but the major effort usually turned out to be the latter.