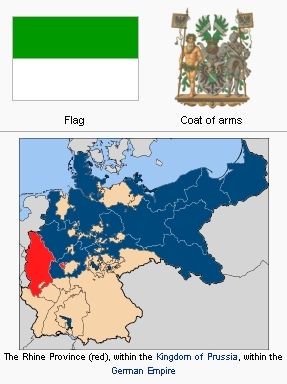 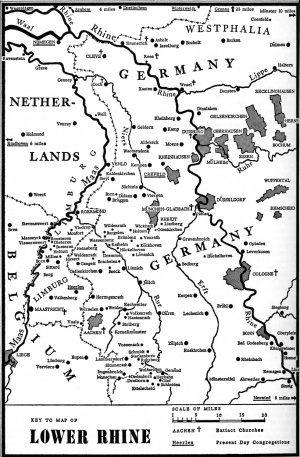 Rhine Province, since 1824 embracing the Rhenish possessions of Prussia; the former principalities of Cologne and Trier, the former duchies of Cleve and Jülich, but without the Born district, which in 1814 was ceded to the Netherlands), Berg, the gravures of Mörs with Krefeld and Wied with Neuwied, and im­perial cities including Aachen and Wetzlar (see Lower Rhine). The total Mennonite popula­tion in 1812-1827 of about 1,200 in this area were enumerated as follows: in the government district of Cleve (later a part of Düsseldorf) a total of 141 Mennonites in 1812, the city of Kleve having 51, Goch 39, Issum 8, Kalkar 9, Xanten 2, Wesel 4, Emmerich (1815) 23, and Rees (1815) 5. The gov­ernment district of Düsseldorf (original area) had in 1819 a total of 720, distributed in Krefeld with 696, the rest scattered. In the government district of Cologne there were in 1817 two Mennonites. In the district of Koblenz there were in 1827 a total of 278 Mennonites, the Neuwied area having 218, Altenkirchen area 12, Braunfels area 27, and Kreuznach area 21. The government district of Aachen had in 1827 four Mennonite families, one living in the Heinsberg area, two in the Aachen (Burtscheid) area, and one in the Düren area. The government district of Trier had in 1827 a total of 15 Mennonite families, one living in each of the areas of Wittlich, Trier, Saarbourg, Merzig, and Ottweiler, three in Saarlouis, and seven in Saarbrücken.

Reiswitz lists for 1829 the congregations of Kleve, Emmerich, Rees, Krefeld, and Neuwied; Goch and settlers in the district of Trier who had been trans­ferred from the Palatinate.

In addition to the liberal city congregations, which were of the Dutch Mennonite type, and all of which except Krefeld and Neuwied gradually died out, there were Amish settlements; viz., the rural con­gregation of Neuwied, which extended over Andernach as far as Münstermaifeld, and which in 1857 (besides the city congregation of 35 members) had 200 baptized members. It also disappeared. Where­as the city congregation of Neuwied adopted the Cornelis Ris Confession of Faith, the Amish held to the Dordrecht Confession. As late as 1818 the Landrat of Braunfeld expressed serious distrust of the quiet and sober, industrious and competent Amish farmers, because they let their beards grow, wore no buttons, took part neither in (state) church services nor religious instruction, and married only in their own group.

The Prussian government at once sought to reach an understanding with the Mennonites living in its Rhenish possessions. On 7 June 1815, Chancellor Hardenberg, in the midst of the Congress of Vienna, wrote a letter to the Oberpräsident in reply to his report that there were many Mennonites living there. His letter inquired what attitude the Mennonites had taken under French rule and how they were planning to help in the defense of the country. In 1818 the small Amish congregation near Dierdorf (Neuwied area) wrote a letter to the chancel­lor and received a prompt reassuring reply. The Krefeld congregation was in constant communica­tion with the king and the Oberpräsident. Individ­uals also, e.g., Hermes and Winkelmann of the Krefeld congregation, personally fought the issues of nonresistance and the oath through to the highest instance. Meanwhile the Berlin government was also working on the problem. On 8 July 1817, the Minister of the Interior, and on 8 February 1819, the Council of State, presented to Frederick William III a report based on Menno Simons, the con­fessions of Dordrecht and of Cornelis Ris), the writings of Schijn, Zeidler (1698), Rues (1643), Crichton (1786), Starck (1789), and others. Shortly before the question of the oath was settled in 1827 by an order of cab­inet, the king requested that all Mennonite heads of families be questioned on their position on nonresistance. The question was not settled for them until 16 May 1830. Most of the Mennonites had accepted military duty, but all those who remained nonresistant, including the Quakers, were to be excused from service, but must pay a 3 per cent income tax; they should be admitted to local offices but not to state offices; they were not permitted to acquire land, and the settlement or reception of new mem­bers was prohibited. By 1848 Hermann von Bekkerath  was in a position to say in the Frank­furt Parliament that the Mennonites in the Rhineland with few exceptions had accepted military serv­ice, and that they did not regard the rejection of this service as a necessary part of their doctrine.

Rhenish Hesse (German, Rheinhessen), since 1815 the possession of the Grand Duke of Hesse, situated on the left bank of the Rhine, viz., the northern edge of Rhineland-Palatinate (Alzey district). For the distribution of the Mennonites in the areas of Mainz, Alzey, Bingen, Oppenheim, and Worms in 1871-1925, see Hesse. The Mennonite membership in congregationsas of 1954 follows:

The Uffhofen congregation is under the care of the pastor of Weierhof; Ibersheim, Eppstein, and Ludwigshafen-Friesenheim are united, as are Monsheim and Obersülzen , disregarding the new political divisions. The change from a lay ministry to a professional ministry began in the Hessian congre­gations. In 1817-1822 a merger was formed between the Lutherans and the Reformed, which the Men­nonites were also urged to join. This they refused to do; and believing that they would be in a better position to assert their independence if they had professional ministers, the Kriegsheim con­gregation, which in 1820 transferred its center to Monsheim, in 1818 called Leonhard Weydmann (1793-1868) as the first minister of this kind, who had been educated at the universities of Basel, Amsterdam, and Berlin. The second trained min­ister was called in 1832 to Sembach in the Rhenish Palatinate, viz., Johannes Risser (1810-1868), educated at the universities of Heidelberg, Erlangen, and Bonn. The third was the older Jakob Ellenberger (1800-1879), called to Friedelsheim; he had studied in the Zeller Institute at Beuggen, east of Basel. In 1835 Weierhof in the Rhenish Palatinate followed with a trained minister, and in 1843 Ibers­heim in Rhenish Hesse.

Outstanding Mennonite farmers of Rhenish Hesse were Christian and August Dettweiler; Peter Dettweiler was a leading physician in com­bating tuberculosis; Jakob Finger as Minister of State governed the entire province in 1884-1898.