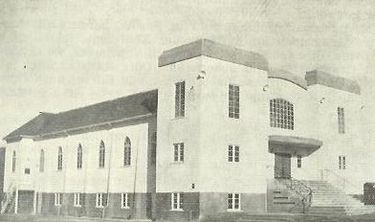 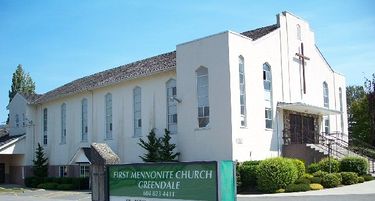 River of Life Church (formerly known as First Mennonite Church Greendale) is located in the Greendale area of Chilliwack, British Columbia, approximately 60 miles / 100 kilometers east of Vancouver. The first Conference of Mennonites church to be organized in British Columbia began here in 1928-29, when the first settlers came to the Sardis and Sumas areas from the prairie provinces of Canada and elsewhere. In April 1930 a large wooded area owned by the Northern Construction Company was subdivided into 28 lots of 18 to 25 acres each. The sale of this land was available only to Mennonites. This resulted in a significant increase in the number of Mennonite families in the area. At first the various families met in a chicken barn and the homes of Nicolai Bahnmann and Johann Reimer or outdoors, but eventually a meeting house was constructed in 1931. On 31 October 1931 the congregation was formally organized with 80 members as the First Mennonite Church of Sardis under the leadership of Elder Nicolai Bahnmann, and all the settlers of Mennonite Church background from both Yarrow and the Sardis and Sumas areas joined the congregation.

The first meetinghouse was enlarged in 1941. In 1947 a new church measuring 50 by 100 feet and seating 1,200 was constructed, with a dedication service held on 2 November 1947. Greendale experienced the disastrous 1948 flood, when the waters rose to cover the floor of the church. The church building was destroyed by fire on 13 December 1955, most likely due to faulty wiring. On 2 September 1956 a new sanctuary built on the same foundation but with a smaller sanctuary and the addition of classrooms was dedicated. The building was renovated in 1986.

The congregation had a strong Sunday School and youth work ministry from the early years of its existence. In 1930 the Maria-Martha Vereins (Maria-Martha Circle) was established by Katharina Friesen. In the late 1950s the members were farmers, most of them in berry farming. Services were conducted every Sunday in German; there was a Sunday school for the children, a chorus, a young people's organization, and three women's missionary societies.