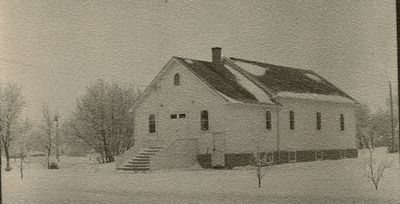 The Rosenfeld, Manitoba area was settled in 1876 by people mostly from Fürstenland Mennonite settlement in Russia. When the Reinländer Gemeinde was formed in 1880, these families opted to be served by Chortitzer church leaders from the Manitoba Mennonite East Reserve. After the division in 1892 most of these families joined the Sommerfelder group. The Bergthaler presence was first established here in 1903 and by 1904 there were regular worship services conducted here in rented facilities. However over the next twenty years or so these worship services were held irregularly. John D. Loeppky is considered the founding leader of the group.

Only in 1928 were regular services held for the Bergthaler group. In 1942 they built their own meeting house. The relationship with the central Bergthaler leadership was strained during these years. In 1949 this building was renovated.