From GAMEO
Revision as of 23:55, 29 July 2018 by RichardThiessen (talk | contribs) (Added category.)
(diff) ← Older revision | Latest revision (diff) | Newer revision → (diff)
Jump to navigation Jump to search
A checked version of this page, approved on 29 July 2018, was based on this revision. 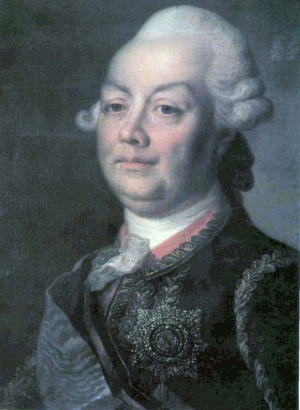 Peter Alexandrovitch Rumyantsev (Pyotr Alexandrovich Rumyantsev-Zadunaisky [Russian: Пётр Александрович Румянцев-Задунайский]) (15 January 1725–19 December 1796), was a Russian general and later field marshal who received the honorable name Zadunaysky because he crossed the Danube River in the Russo-Turkish War (1770-74). During this campaign on the border between Moldau (Moldavia) and Poland he met the Hutterian Brethren who had to leave Walachia and were interested in settling in Russia, and invited them to settle on his estates in the Ukraine near Kiev, granting them very favorable privileges.

Under the protection of an officer the Hutterites proceeded through Poland to Vyshenka, on the Desna River, where they arrived on 12 August 1770. Rumyantsev continued to be their protector and defender until his death in 1796. At this time three Brethren were sent to express their sympathy to the family and to negotiate with the heirs regarding their lease. Because of difficulties with the heirs they left Vyshenka in 1802 to settle on crown lands at Radichev, where they enjoyed for a while the privileges of the Mennonites of Russia. Later they settled near the Molotschna Mennonite settlement.