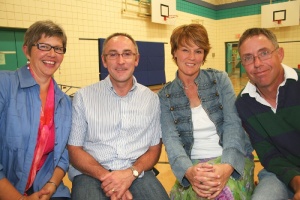 Saturday Night Church, a member of the Evangelical Mennonite Conference (EMC), began its services in Landmark, Manitoba, in 2005 because of concern about people who were uncomfortable with a large church structure.

On 13 September 2005 a meeting was held with the leaders of Prairie Rose Evangelical Mennonite Church, also in Landmark area, about starting another group. In October 2005 the group began to meet on Saturday night in the west wing of Prairie Rose’s building; moved into the library and then the gym of the Landmark Elementary School; and, still later, began to share the meeting place of the Landmark Christian Fellowship.

Saturday Night Church joined the Evangelical Mennonite Conference in 2007. In 2009 its worship served averaged 75 to 80 people.  In 2012 its Sunday School averaged 10 people and the worship service 60.

In 2009 Cyndy Warkentin, an educator and the daughter of an ordained EMC minister, was described as the church’s coordinator. By 2011, she was officially listed as Saturday Night Church’s pastor.