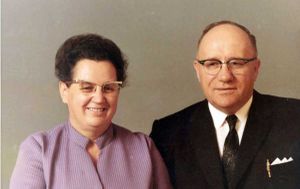 Wilfred lived the first 38 years of his life in the Tavistock, Ontario area where he was active in church youth work and interdenominational efforts. He attended SS#2 South Easthope (Hartlieb) elementary school where he completed grade eight. Wilfred was not privileged to attend high school, college or seminary; he often felt inferior with only a grade eight education. His “PhD son” kept reminding him “not to confuse schooling with education”; Wilfred had an uncanny ability to extract learnings from his everyday experience and voracious book reading. He did attend Ontario Mennonite Bible School & Institute for several winters to advance his theological knowledge.

As a youth, Wilfred attended East Zorra Amish Mennonite Church where at age 21 he and Walter Bender started the “Lend-A-Hand Literary Society” for youth. He was also instrumental in starting Sunday evening services while in his 20s.

Wilfred purchased two highly productive, mixed use farms at Punkeydoodles Corners, and was also a partner in developing a butcher shop business in nearby New Hamburg. He displayed his abilities as a “good-with-money” farmer and entrepreneur. He grew up in a family where he learned to work hard and save his dollars.

In March 1948, Wilfred and Emma Schlegel moved their family to Middlesex County northwest of London, Ontario where Wilfred would become the founding pastor of Nairn Mennonite Church. When the Ontario Amish Mennonite Mission Board purchased the Nairn Presbyterian Church, this “born leader” assigned others to various tasks to clean up and renovate but left the dirtiest jobs for himself. This was highly respected. He initially served as Sunday school superintendent for the new congregation. Wilfred was chosen by lot to become the first local pastor in early 1949 and was ordained on 6 March 1949 by Bishops M. O. Jantzi, Samuel Schultz, and Henry Yantzi.

Wilfred continued his three-prong career as pastor, farmer, and businessman. He owned five highly productive cash crop farms in East Williams Township growing speciality crops. He also purchased a private hospital in 1953 which he operated until 1967. He purchased several apartment buildings in London, and often helped struggling families by lowering rents. In 1967, he invested in a large nursing home near London to serve chronic psychiatric patients. He sold this to his son, Ron, in 1969 due to health issues, but in 1972 developed a 110-acre family campground so families could enjoy nature, the environment and strengthen family relationships (something he acknowledged that he largely failed at himself due to extreme busyness!)

Never a “Sunday pastor”, Wilfred started many projects for those less fortunate in physical, mental and spiritual health. He, with Alvin N. Roth, started Goodwill Rescue Mission (now Mission Services of London) in 1951. Mission Services later built new facilities in 1961 and subsequently expanded into Men’s Mission and Rehab Centre, Women’s Mission Centre, Teen Girls’ Home and Quinton Warner AA Residence (Alcohol Treatment). In 1953, the King Street Mission started as a Sunday School, and was the forerunner of Valleyview Mennonite Church. The Stratford Sunday School started with his brother-in-law, Floyd Baecher, preceded the Avon Mennonite Church in Stratford, Ontario. The same strategy of including an income producing property was included in each project to ensure financial sustainability.

In 1952 the Nairn congregation purchased Hopedale Farm, which became the Ailsa Craig Boys Farm in 1955, a treatment centre for emotionally disturbed teen-aged boys. The Boy’s Farm had its mortgage liquidated by Wilfred Schlegel and Edward G. Snyder of Kitchener, Ontario before it was turned over to Mennonite Central Committee for ongoing operations. Jack Wall, along with Wilfred, started Parkhill Girls Home in 1957 for emotionally disturbed teen-aged girls. In the mid-1960s Jack Wall and Wilfred Schlegel started Ausable Springs Ranch, a program to provide family rehabilitation settings for youth. In the late 1960s Wilfred started Meadowcrest Homes, group homes for “mentally and emotionally challenged” adults and chronic psychiatric patients. All these projects continued to the present (2018) illustrating Wilfred Schlegel’s emphasis on financial sustainability.

The “Mission Farm” (100 acres) was purchased by the Nairn congregation in 1958. It was intended to help young men and women who wanted to get a start into farming by offering low rents. It also provided rental income to the small congregation which enabled a variety of mission projects (both local youth programs and foreign missions). This project again was driven by Wilfred’s vision.

Wilfred spearheaded a senior’s program with Craigholme Nursing Home owned by the Nairn congregation (1950). In the 1970s this expanded into Craigweil Gardens Senior Citizens Apartments and Senior Citizens’ Activity Centre. He assisted this and other community projects with his financial acumen and resources of “time, talent and treasure.”

His willingness to be of service extended abroad as he was on the Board of Directors for International Child Care, a global agency providing tuberculosis vaccinations for children. He spent much of his last winter (1978) personally serving among the poor in Haiti.

Wilfred was the consummate community builder as the driver of many projects benefiting others, being the primary leader in the Nairn Mennonite Church and its “spin-offs”. This small congregation started more mission projects in its first 20 years than the entire conference to which it belonged, though the conference supported several of its projects with volunteer labour and also at times with funds.

With time left over Wilfred Schlegel was a very successful businessman. He practiced “servant leadership” long before the term was in vogue. He was a born leader, who led by action and example.

Arnel, Ruth. A Time of Change : Commemorating the 25th Anniversary of the Nairn Mennonite Church. Nairn, Ont.: The Church, 1973.