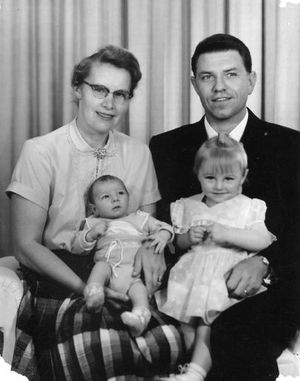 Together with her parents and older brother, Olga Pries immigrated to Canada in 1927, arriving in Saint John, New Brunswick. The family settled in Alexander, Manitoba, where Olga went to school. She became a Christian at the age of 18, was baptized on 27 August 1944 in Griswold, Manitoba, and joined the Alexander Mennonite Brethren Church (later called the Griswold Mennonite Brethren Church). She helped with Sunday School, summer Bible School, and other programs while finishing high school at Winkler Collegiate.

Olga Pries studied at Winkler Bible School, receiving diplomas in Biblical studies and teacher training at her graduation in 1948. Next, she enrolled in a nursing program in Brandon, Manitoba, and received her qualifications in February of 1953 before taking classes at Tabor College in Hillsboro, Kansas, USA. She was ordained as a missionary by the Griswold Mennonite Brethren Church and left New Orleans, Louisiana on 31 December 1953. She arrived in Brazil at the end of January 1954 and settled into her first term of service in Curitiba.

At the orphanage where Olga Pries worked, she met her first husband, Jacob Dueck, who was also serving there. They married in Curitiba on 23 March 1957 and eventually had a girl and two boys. For six months in 1967, Jacob and Olga worked in the German department of the Mennonite Brethren radio station in Quito, Ecuador, temporarily replacing the regular workers there. They returned to Canada later that year and settled in Winkler, Manitoba. Jacob died in 1981, but in the meantime, Olga worked for several years at the Salem Personal Care Home in Winkler. She retired in 1989 and moved to Winnipeg.

On 29 December 1994, Olga Dueck married a widower, John M. Schmidt (1918-2008), and began attending the Eastview Community Church, where they continued to participate as long as they were able. For his last few years, John lived in the Donwood Manor Personal Care Home in Winnipeg. Olga lived for two more years following her husband’s death, but she died on 31 March 2010 of Parkinson’s Disease.

Olga Pries Dueck Schmidt was a dedicated mission worker who used her skills to help the people of both Brazil and Canada. Through her work in churches, among children, and in other areas of life, she left an example of commitment for others to follow.