Shalom Counselling Services began in November 1982 as a project of Mennonite Central Committee Ontario (MCC Ontario). It was intended to make available professional counselling services in Ontario communities with a significant Mennonite population. The name is based on the Hebrew word for peace and wholeness.

After working with four regional centers at by the 1990s, in 2010 Shalom became centered in Waterloo, Ontario, Canada, with a commitment to provide a faith-based counselling agency that respected the diversity of persons, backgrounds and beliefs within the larger community. 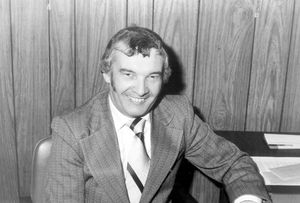 Two men led the emergence of Shalom Counselling in the early 1980s. Ralph A. Lebold (1934-2017) was a Mennonite pastor, conference minister, and in the early 1980s the president of Conrad Grebel College. As a young pastor in London, Ontario in the early 1960s, a young man who had boarded in Lebold’s home committed suicide. Lebold felt his training from seminary did not adequately prepare him to deal with this crisis. He went on to do graduate studies at Crozer Theological Seminary in pastoral counselling.

The second initiator was William W. ("Bill") Dick (1926-2002), who had served as a pastor in two Mennonite congregations, and then served for many years as the Director of Counselling Services at the University of Waterloo, Waterloo, Ontario.

In 1981 these two men gathered a group of 13 persons to discuss the possibility of establishing counselling centers across Ontario under inter-Mennonite leadership. Mennonite Central Committee Ontario, at its annual meeting in late 1981, agreed to be the sponsor. Bill Dick served as the first chair of the Ontario board.

Counselling centers were envisioned to begin in five Ontario locations -- the Niagara area, the Region of Waterloo, the City of Toronto, the Aylmer area and Essex County. Ultimately only four locations were established.

The pilot project emerged in St. Catharines in November 1982 in a local shopping plaza. Rudy Bartel, pastor of the Virgil Mennonite Brethren Church, chaired the local committee, and served as the first co-ordinator on a quarter time contract. A part time receptionist handled requests, and assisted in matching clients to Mennonite or Brethren in Christ counselors suited to their needs. Funding came from the local region, and clients were asked to make a donation for services if able. Counsellors were provided in a variety of fields, ranging from marriage and family, financial management, career changes, and conflict resolution. As the organization matured, these emphases shifted a bit.

The Waterloo region was the second center to open a year later in December 1983. It opened in the facilities of the Erb Street Mennonite Church in December 1983. Ralph Lebold chaired the regional committee from its beginning to 1990. Delphine Martin, who had an MA in Psychology and Counselling certification in Marriage and Family Therapy, served as the first Executive Director. The third office, in Aylmer, Ontario, was part of MCC Ontario’s work with Low German Mennonite immigrants to the area in the late 1980s and early 1990s. Victor Fast did counselling as a staff person for MCC. He reported on his counselling to Shalom’s Ontario-wide board, but when Shalom’s relationship with MCC Ontario ended in 1993, Shalom’s relationship with the Aylmer office also ended.

The fourth center, in Leamington, Ontario did not open until 1993. Marian Wiens established this office, initially in the Leamington United Mennonite Church. George Schartner chaired the regional committee. Marian served as director of the Leamington office until she and her husband, Erwin, accepted an assignment with Mennonite Church Canada Witness in 2002 to work in South Korea.

The structure of Shalom Counselling Services became quite complex. An Ontario board provided oversight on contracts with counsellors, especially if there were any concerns about qualifications. It also shaped overall policy on accountability relationships and performance reviews. However the provincial board had no staff, and did no fundraising. Its funding came through donations and a small percentage of regional center revenue. The Ontario board chair had a significant leadership role, as did the chair of the Professional Review Committee that developed as a committee of the board.

Each center had its own regional committee, which did fundraising to supplement operational income, and recommended director appointments to the provincial board. The regional committee chairs and center directors reported at the Ontario board’s quarterly meetings.

Initially clients may have been predominately from the Mennonite and Brethren in Christ communities, but over time each region expanded its vision to become more inclusive. Each region also contracted with Christian counsellors from a variety of denominational backgrounds. In Niagara and Leamington non-Mennonite regional directors were hired as well. The range of clients expanded, and came to include people of various faith (and non-faith) backgrounds.

All the centers provided services to clients who could not afford regular fees. This made fund-raising an important part of Shalom’s organizational life. This was often done through breakfasts or dinners with well-known speakers.

In 1993 Shalom Counselling Services was released from the Mennonite Central Committee Ontario structure and incorporated as a separate non-profit charity.

The Niagara center closed at the end of 1995. It had difficulty retaining long term directors, and its local standing was damaged by a case of sexual misconduct by a counsellor with a client in 1992. This incident reduced local support, and contributed to the decision to close the Niagara center.

The Leamington center experienced service growth and expansion. In 2005, under a new executive director, Shalom expanded services into the city of Windsor, with the initial financial assistance of four large Protestant congregations located there. However, as it became clear Shalom would never be fully self-supporting because of its policy of providing services to anyone, regardless of ability to pay, this support declined, creating unsustainable cash flow problems. The Leamington/Windsor center closed in December 2009.

The Waterloo center continued to thrive. In 2002 it moved out of the Erb Street Mennonite Church building to a stand-alone house also owned by the church. In 2015 an addition costing over $1,000,000 was built for the staff of thirteen persons. Its 2014 operating budget was just under $500,000.

Shalom Counselling Services does not regard itself as a “Mennonite” organization. The mission of Shalom Counselling Services, as stated in 1996, and maintained in 2016 was “Helping People Grow Toward Peace and Wholeness.” This was done through the provision of therapeutic counselling, consultation, and educational programs that integrate emotional, relational and spiritual dimensions. Shalom regards itself as a faith-based agency that respects the diversity of persons, backgrounds and beliefs within the community. Shalom’s professional staff persons are Christians who are accredited with a minimum of a master’s level counselling education, and recognized counselling accreditation.

“Health of community target of director.” The Leamington Post (2 February 1993): 7B.

Shalom Counselling records for 1982-1993 are located at Mennonite Archives of Ontario, Waterloo, Ontario.

Shalom Counselling records for 1995-presently are located at Shalom’s offices.